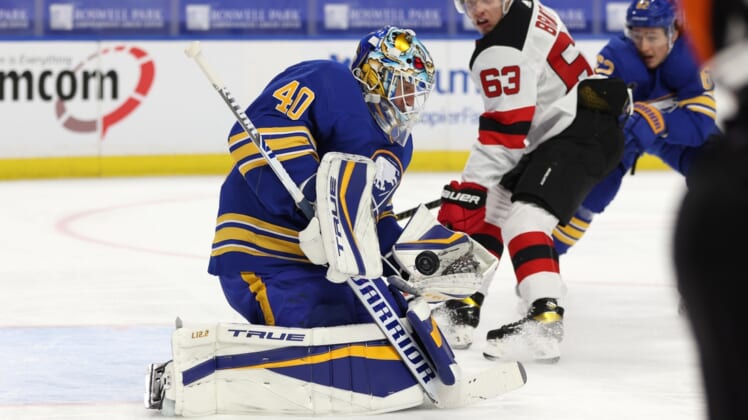 Following a lengthy interruption due to COVID-19 complications, the Buffalo Sabres are poised to return to game action for the first time in February.

Awaiting the Sabres will be a New York Islanders club playing its best hockey of the season.

Though far from 100 percent, the Sabres look to keep the visiting Islanders from extending their point streak to seven games on Monday night.

Buffalo hasn’t played since a 5-3 home loss to the New Jersey Devils on Jan. 31. Following that defeat, which ended the club’s 3-0-2 stretch, COVID-19 halted team activities.

Head coach Ralph Krueger and defenseman Rasmus Dahlin returned to practice on Sunday after being placed on the NHL’s COVID protocol list.

Though the Sabres could be without regular defensemen Rasmus Ristolainen, Jake McCabe and Brandon Montour, as well as key forwards Dylan Cozens and Tobias Rieder due to COVID-related protocol, the team is set for a return to game action.

“We are in this together, and we are going to do everything as a staff, as a coaching staff, our support staff around the team to give them every opportunity to have success,” Sabres general manager Kevyn Adams told The Buffalo News.

Immediate success for Buffalo might be tough to come by considering how many important contributors could be missing. The Sabres last lost consecutive games in defeats at Philadelphia on Jan. 19 and a setback at Washington three days later. They are also 2-3-1 at home this season.

“We’re going to get it together as a team,” said forward Taylor Hall, who was recently diagnosed with COVID-19 but is in line to play Monday. “We’re still right in the middle of the playoff race that is there for the taking.

“So, I’m excited to be back and hopefully we can win some games here pretty quick.”

Buffalo hasn’t had much success while amid an 0-2-1 rut against the Islanders, who have won three of their last four games and are 3-0-3 over the last six. Jean-Gabriel Pageau scored twice and Jordan Eberle had a goal with an assist as New York posted two third-period goals in a 4-2 victory over the Boston Bruins on Saturday.

“When you’re able to beat a team like (Boston) … that should give your group confidence that you’re right up there with the best of them,” said Eberle, who has six goals and three assists this season.

New York’s Mathew Barzal scored for the sixth time this season on Saturday, and has four goals with six assists during an eight-game point streak. He’s totaled just three points in eight career games vs. Buffalo.

Teammate Semyon Varlamov (6-2-2, 1.98 goals-against average) has stopped 90 of 93 shots during a three-game winning streak against Buffalo. He’s likely to start at least one of these back-to-back games at Buffalo, with backup Ilya Sorokin (0-2-1, 3.65 GAA) possibly seeing action Monday or Tuesday. Veteran goalie Cory Schneider remains on the Islanders’ roster, but hasn’t played since March 2020.

Buffalo captain Jack Eichel has three goals with seven assists in his last eight games against the Islanders.