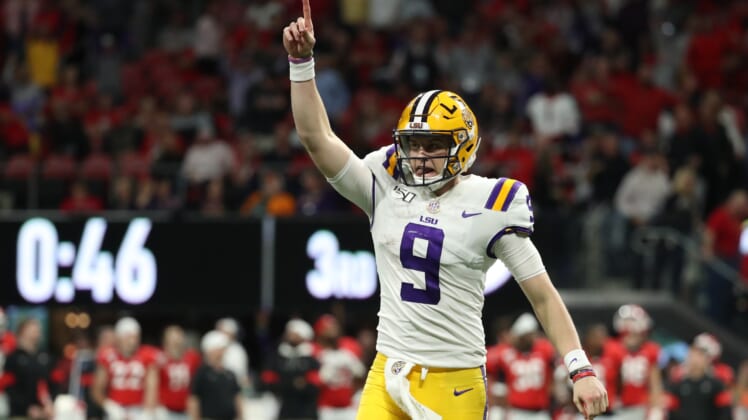 College football’s bowl season is kicking into high gear this weekend with nine big bowl games on Friday and Saturday, including the College Football Playoff semifinals.

Taking a look at the biggest games coming up this weekend, there are some players taking the field you won’t want to miss. Here’s who we’re going to be closely watching during the bowl games and College Football Playoff semifinals.

Though he didn’t get the invite to New York, Chuba Hubbard was one of the top Heisman candidates in 2019 and heads into bowl season with more rushing yards than any other running back in the FBS.

An electric playmaker who can take it to the house at any given moment, Hubbard is a nightmare for opposing defenses to contain. Given the success Georgia and LSU had running the ball against Texas A&M recently, Hubbard could finish off his season in style with another monster game for his team.

The Holiday Bowl is going to feature a bunch of talented players, but NFL fans whose teams will have early draft picks and have a need for defensive help should focus on A.J. Epenesa. He’s projected to be selected fairly early in the first round of the 2020 NFL Draft, for good reason.

Epenesa doesn’t have the gaudy sack totals of Chase Young, but he was a consistent problem for opposing offensive lines all season long. He comes into the Holiday Bowl with nine sacks and three forced fumbles, and Trojans freshman quarterback Kedon Slovis better have his head on a swivel Friday night in San Diego.

In a game that should feature plenty of offensive fireworks from both teams, one playmaker stands out over them all. Nittany Lions receiver KJ Hamler has electric open-field skills and is one of the fastest players in the nation.

An injury slowed Hamler down a bit in November, but this sophomore still tallied 54 receptions for 858 yards and eight touchdowns in 2019. He has the ability to take every pass he catches to the house for six (like this). After having nearly a month to heal up fully, he should be ready to romp Saturday when Penn State takes on Memphis.

The Peach Bowl is absolutely loaded with first-round NFL talent, but the player we, and everyone else, will be watching is future No. 1 overall pick Joe Burrow.

The LSU star will almost certainly be selected by the Cincinnati Bengals next April. But before that happens, Burrow is locked in with his teammates as they pursue a national championship.

Burrow averaged 363 passing yards per game this past year. He threw an absurd 48 touchdowns and just six interceptions going against some of the best defenses in college football. He won the 2019 Heisman Trophy in a record-breaking landslide. Oklahoma does feature an improved defense this year, but the Sooners are still going to get shredded by Burrow on Saturday. Believe that.

If there’s a player in college football this year who is “better” than Burrow, it’s Ohio State defensive end Chase Young. Despite missing two games on suspension, Young won numerous high-profile postseason awards and was first in the nation with 16.5 sacks in 2019.

Young is an absolute game-wrecker. Nearly half of his 44 tackles this season came behind the line of scrimmage (21 tackles for loss), and he forced seven fumbles in 11 tames played. A physical freak of the first order, Young is one of the most exciting players to watch and stands above all others in a game featuring top-flight talent across the board for these two teams.