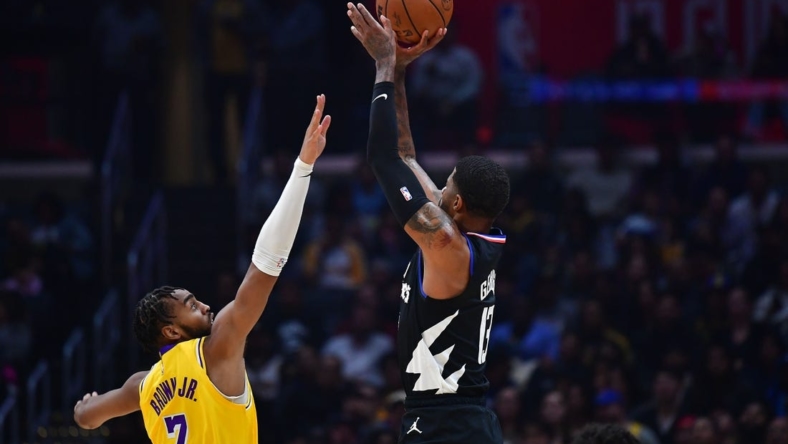 Paul George scored 29 points and Norman Powell added 18 off the bench as the Los Angeles Clippers extended their winning streak over the visiting Los Angeles Lakers to nine games with a 114-101 victory on Wednesday.

Reggie Jackson scored 14 and Luke Kennard had 13 for the Clippers, who last lost to their co-tenant in the final meeting between the teams in the 2019-20 season.

George has scored at least 26 points in six consecutive games.

LeBron James scored 30 points and Anthony Davis added 21 points and nine rebounds as the Lakers lost their fourth consecutive game, one off their five-game losing streak to open the season under new head coach Darvin Ham.

James left the court with less than six minutes remaining due to an apparent leg injury and did not return.

With the game tied 71-71 and three minutes remaining in the third quarter, the Clippers went on a quick 16-4 run to take a 12-point lead into the final period. The Clippers pushed the advantage to 95-82 with 9:49 remaining on a 3-pointer by Powell and went up 103-89 with 5:31 left before putting the game away.

The Clippers led 38-21 after one quarter behind 15 points from George and 60.9 percent shooting from the field as a team. The Lakers used a 20-3 run in the second quarter to tie the game at 48-48 before the Clippers pulled in front 54-52 at halftime.

Marcus Morris St. scored 11 points for the Clippers, while Ivica Zubac and John Wall each added 10. Troy Brown Jr. and Russell Westbrook each had 14 points for the Lakers, and Westbrook dished out a game-high nine assists.

James was back for the Lakers after missing the Monday game against the Utah Jazz due to left foot soreness, while teammate Lonnie Walker IV missed his second consecutive game because of a non-COVID illness.

Kennard made just his fourth start for the Clippers this season and his 17th over the past two campaigns, while Kawhi Leonard (knee) missed his ninth consecutive game.