Paul George hits for 35 as Clippers rally to beat Spurs 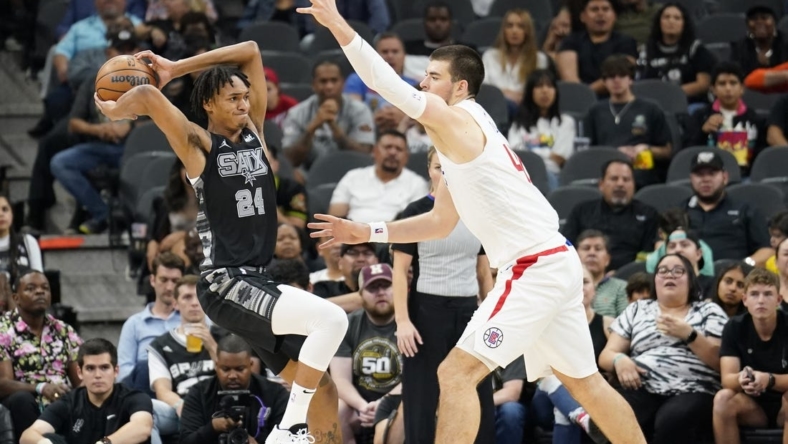 Paul George scored 35 points and Ivica Zubac added 17 points and 15 rebounds as the visiting Los Angeles Clippers came from behind in the fourth quarter the beat the San Antonio Spurs 113-106 on Friday to win their third straight game.

The Clippers trailed by four points heading to the fourth quarter but ran past San Antonio with a 14-3 run over a span of four-plus minutes in the middle of the period. George hit a 3-pointer to put Los Angeles ahead for good at 99-96 with 6:41 to play and built its advantage to 11 points before cruising to the finish line.

Reserve Devin Vassell racked up a career-high 29 points to lead San Antonio, with Tre Jones adding 18, Keldon Johnson tallying 16 and Doug McDermott contributing 10 points. The game was the first of a home-road back-to-back for the Spurs, who play in Denver on Saturday.

The Clippers dominated the first quarter, running out to as much as a 17-point lead as Jackson and George scored seven points each in the period. San Antonio pulled to within 28-18 by the end of the quarter.

The Spurs came all the way back to tie the game at 50 on Jones’ 3-pointer with 1:53 to play in the second quarter. Los Angeles responded with a pair of free throws by George and a layup by Powell, but San Antonio closed the period with an 8-0 run that featured 3-pointers by Vassell and Johnson. The Spurs led 58-54 at the break.

Vassell hit for 17 points in the half to lead all scorers while Johnson added 12 for San Antonio. George topped the Clippers with 12 points and Powell scored 10 off the bench.

The Spurs stoked their advantage to as many as 10 points after a floating jumper by Jakob Poeltl at the 8:08 mark of the third quarter — then again on another floater by Vassell nearly midway through the period. Los Angeles hung tough, drawing to as close as three points on a Wall layup with 1:29 to play before the Spurs settled for an 86-82 lead heading into the final 12 minutes of play.