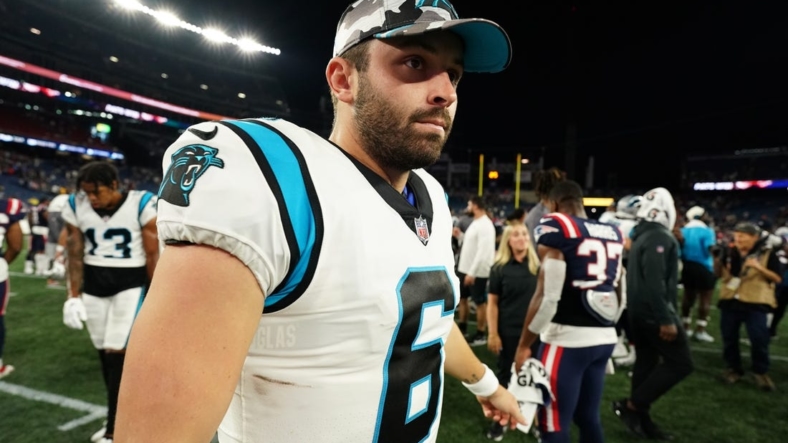 Some players take the high road when asked about facing a former team after an ugly split.

Talking about his Week 1 reunion with the Cleveland Browns, the signal-caller reportedly delivered some explosive bulletin-board material instead.

The reporter, Cynthia Frelund, shared the story with the “Around the NFL” podcast posted on Monday night.

“I walked up to him and said, ‘I’m so excited to see you, like, go kick some butt,’ I didn’t say that word,” she said. “… Go kick some butt, especially Week 1, I like cannot wait. And he uses some expletives and I was like, ‘I just hope you’re like ready.’ He was like, ‘I’m gonna bleep them up.'”

The Browns traded Mayfield, the No. 1 overall draft pick in 2018, to the Panthers on July 6 for a 2024 conditional fifth-round draft pick.

Mayfield was 29-30 as the starter in Cleveland and completed 61.6 percent of his passes for 14,125 yards with 92 touchdowns and 56 interceptions.

After an injury-marred season in 2021 and growing discontent between the two sides, the Browns’ front office initially said Mayfield would be their starter in 2022. But their acquisition of Deshaun Watson from the Houston Texans in March, despite more than 20 civil lawsuits from women alleging sexual misconduct, sealed the split with Mayfield.

Mayfield won a training camp QB1 battle with Sam Darnold, the No. 3 pick in the ’18 draft.

With Watson serving an 11-game suspension to begin the season, Jacoby Brissett will start for the Browns opposite Mayfield on Sept. 11 in Charlotte, N.C.