The updated odds to win March Madness are out with the NCAA Tournament heading to the championship game between North Carolina and Kansas.

The Tar Heels won in dramatic fashion against their ACC-rivals in that of the Duke Blue Devils in the Final 4. Meanwhile, Kansas absolutely blew out Villanova in its Final 4 appearance on Saturday. 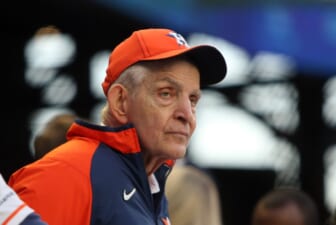 In his first season taking over for Roy Williams, coach Hubert Davis has led his team to the Final 4, a stage the Tar Heels haven’t reached since 2017.

In said Final 4 game, North Carolina was able to pull away late and take out the hated conference rival Blue Devils. It’s a game that saw star guard Caleb Love score 28 points on 11-of-20 shooting, including the dagger three late.

North Carolina entered last month with long odds to win March Madness. But after an absolutely shocking five-game run with wins over Baylor, UCLA and Duke, Davis’ squad could easily be cutting down the nets in New Orleans Monday evening.

March Madness FAQ: Everything you need to know

To say this squad is battle tested would be an understatement. It has played 15games against top-25 teams — a clear indication Kansas’ odds to win March Madness (-112) might be a good bet.

None of this changed in the first five rounds of the NCAA Tournament. Kansas disposed of Texas Southern in the first round before a narrow win over Creighton in the Round of 32. That latter game saw Remy Martin come off the bench for 20 points, seven rebounds and four assists on 5-of-9 shooting.

Kansas’ depth ultimately proved to be too much for other teams in the Midwest Region. That included blowing out the Miami Hurricanes by the score of 76-50 in the Elite 8.

Hot from the jump, Kansas then blew out Villanova in the Final 4. It’s a game that saw Ochai Agbaji hit on his first four three-pointers, setting the stage for an 81-65 route.

Agbaji’s performance against Love will be key Monday night. He shot just 33% from the field in Kansas’ first three tournament games. Over the past two outings, the guard is averaging 19.5 points on 89% shooting from distance. That’s insane, and it could help Kansas win it all. 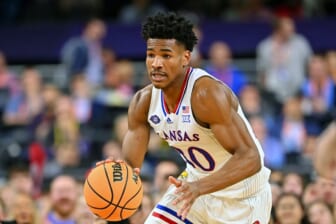