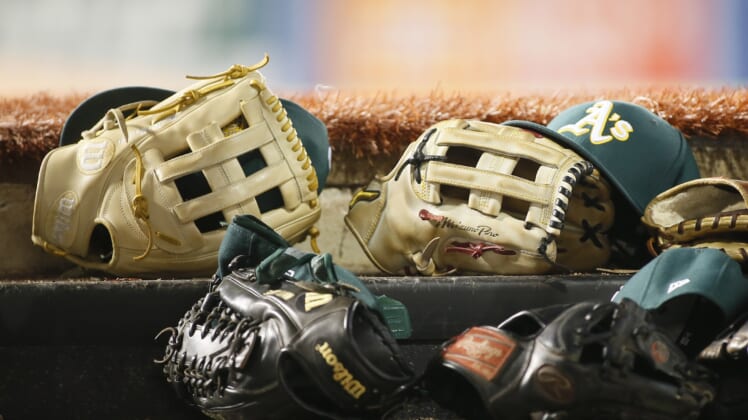 May 17, 2018; Toronto, Ontario, CAN; Gloves and hats of the Oakland Athletics in the dugout during the eighth inning against the Toronto Blue Jays at Rogers Centre. Oakland defeated Toronto. Mandatory Credit: John E. Sokolowski-USA TODAY Sports

It’s now becoming a troubling and consistent trend around the baseball world. Multiple teams having to suspend their seasons due to positive COVID-19 tests. During a truncated 60-game MLB season, this will make it difficult for teams to complete their schedules.

One of the top World Series contenders around the Major League Baseball world has now been impacted.

It’s not yet known what member of the Athletics’ organization tested positive for the virus. What we do know is that the American League West’s best team will self-isolate in Houston while contact tracing and waiting for more test results.

Star young pitcher Jesus Luzardo tested positive for the virus ahead of the start of the 2020 season earlier this summer. Though, the A’s themselves have been largely uninfected by the spread of COVID-19 around the baseball world.

This comes with Oakland boasting a 22-12 record and 2.5 games ahead of Houston in the American League West and after it was swept in a doubleheader by the very same Astros on Saturday.

Ramification of potential COVID-19 outbreak with the A’s?

MLB now has its first potential outbreak from a team that has to be seen as a top-end World Series contender. Previously, the St. Louis Cardinals and Miami Marlins had widespread outbreaks of the virus. Each of those teams missed more than a week of action before returning to the field. For the Marlins, that included a near complete overhaul of their Major League roster.

Oakland has a mere 26 regular-season games remaining before a trip to the playoffs. Being idle for a week-plus could have some wide-ranging ramifications for the team, bringing up more questions about competitive balance around baseball during the 2020 season.