No. 2 Gonzaga continues road show at No. 11 Texas 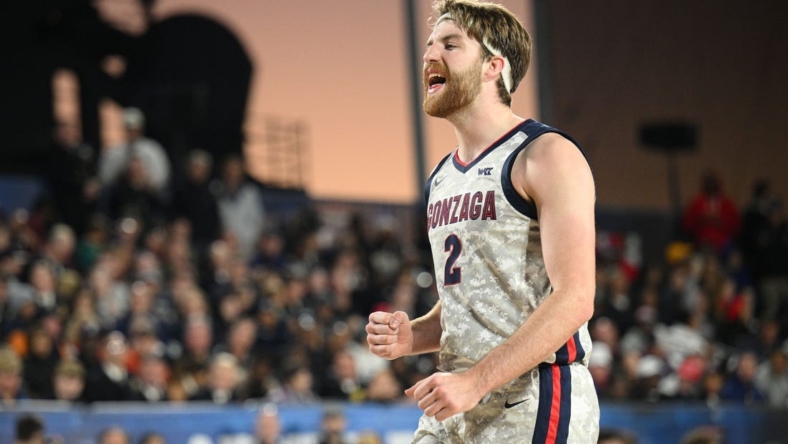 On Friday, No. 2 Gonzaga played on the deck of an aircraft carrier just outside San Diego and snuck past Michigan State.

On Wednesday night, the Bulldogs plan to turn to their aircraft carrier in a big game at No. 11 Texas in the brand-new Moody Center in Austin, Texas.

Senior forward Drew Timme abused the Spartans in the lane with 22 points, 13 rebounds, four blocked shots and four assists in the Veteran’s Day opener, the type of performance one would expect from a national Player of the Year candidate.

Can he do that in a true road environment against a team that’s going to be hyped to face him after he torched Texas for a career-high 37 points last season in an 86-74 win that wasn’t nearly as close as the score suggests?

There’s certainly no doubting Timme’s presence and production made the difference in a tight game against a good opponent doing everything it could to stop him last week.

“It wasn’t the prettiest game to watch,” Timme said. “It was ‘just put your nose in the dirt and keep going and don’t stop.’ I thought it was a true test of our grit and heart and I think we did a good job of answering the bell today.”

They held Michigan State to 40.4 percent shooting from the field and 3 of 16 on 3-pointers in the open-air environment. And the Zags earned a 40-32 advantage on the glass, allowing just nine offensive boards in 37 available shots.

But it all circled back to Timme, who fouled out two different players trying to keep him in check and made the big shots Gonzaga (2-0) needed.

“When it was winning time, he went up and got some real rebounds,” said Spartans coach Tom Izzo. “Then (he) put shots back, 3-point plays, posted as hard as he could post. I think he is a very good player and a good kid.”

Meanwhile, the Longhorns (2-0) will undergo their first true test of the season. They won their first two games by a combined 66 points, including an 82-31 beatdown of Houston Baptist on Thursday night.
Texas physically enforced a rout against the Huskies, dominating the boards 56-33 and forcing 21 turnovers. Houston Baptist made just 13 of 60 attempts from the field, including 4 of 25 from 3-point range.

The Longhorns have been balanced in the early going. Iowa State transfer Tyrese Hunter is leading the way at 14 ppg on 55.6 percent shooting, while Sir’Jabari Rice is chipping in 12.5 ppg. Point guard Marcus Carr averages 11.5 ppg to go along with 4.0 assists.

Texas still has plenty left in the tank if coach Chris Beard’s instincts are correct. It went just 3 of 22 from 3-point range against Houston Baptist, missing its first 14 attempts.

The Zags own a 4-0 lead in the series. This will be the first time the teams have met in Austin.