No. 15 Auburn comes from behind to top USF 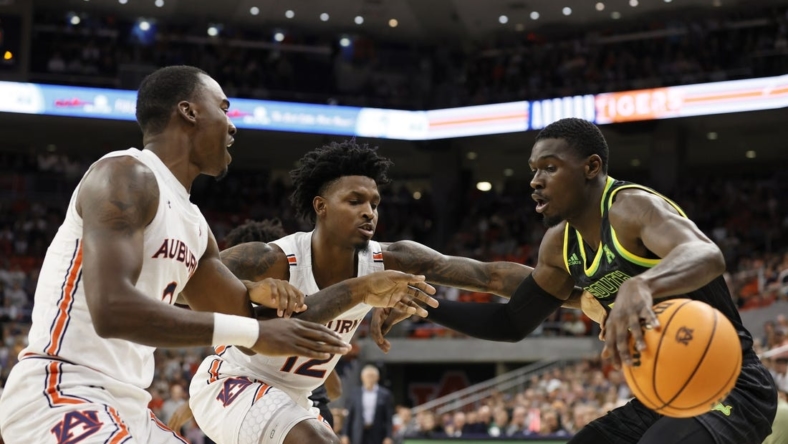 Behind the play of guards Wendell Green Jr. and Allen Flanigan and another strong performance from center Dylan Cardwell, No. 15 Auburn rallied for a 67-59 home win over South Florida.

Scrappy defense and key contributions from Green, Flanigan and Cardwell sparked the second-half comeback by Auburn. The Tigers (2-0) trailed by nine at the break but outscored the Bulls 46-29 in the second half.

Flanigan’s 3-pointer from the corner gave the Tigers a 39-37 lead with 12:51 to go in the game. He led Auburn with eight points in the first half and finished with 18 points, hitting 3 of 6 from behind the 3-point arc, and four rebounds.

Cardwell, who appeared to injure his leg late in the game, had seven points, two rebounds and five blocked shots.

Auburn opened the game 0-for-5 from the field, including 0-for-4 from 3-point range, as South Florida held a 5-2 lead after five minutes.

The Tigers’ poor offensive start continued as Bruce Pearl’s team trailed 9-2 with 13:35 left to go in the first half. But a Cardwell free throw and a Flanigan 3-pointer cut the deficit to three with 12:43 left to play in the first half.

A Bryant layup put the Bulls up 26-18 with 2:11 to go until halftime. His rebound and dunk put-back capped the first-half scoring and gave Bulls a 30-21 lead at the break.

Miguel, Bryant, Chaplin and Sam Hines Jr. had six points each for South Florida through 20 minutes.

South Florida outrebounded Auburn 23-19 in the first half and 43-41 overall. The Tigers outshot the Bulls from the floor, 40.4 percent to 35.5 percent.