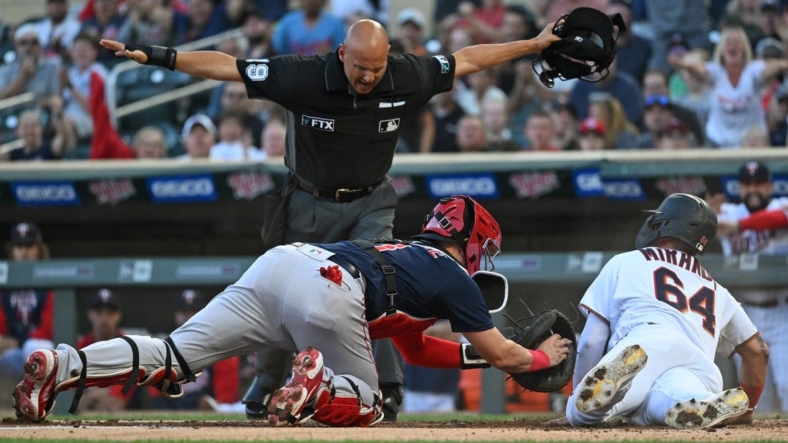 Nick Gordon hit his first career grand slam and drove in a career-high six runs as the Minnesota Twins quickly recovered after blowing a three-run lead and extended their winning streak to five games with a 10-5 victory over the visiting Boston Red Sox on Tuesday in Minneapolis.

Jake Cave and Gary Sanchez also homered for the Twins, who have outscored the San Francisco Giants and Boston 34-12 in the wake of a six-game losing streak.

Gordon, who is batting .312 this month, also got Minnesota started with a two-run double in the first off Boston rookie Kutter Crawford (3-6) after Max Kepler and Jose Miranda walked.

Rafael Devers lifted a sacrifice fly in the fourth for the Red Sox, who lost for the ninth time in 12 games. Tommy Pham and Xander Bogaerts hit RBI singles in the fifth before the Red Sox took a brief one-run lead on a wild pitch by Michael Fulmer.

Alex Verdugo contributed an RBI double in the seventh after committing a key error in right field in the fifth.

Fulmer (5-5) ended the fifth by striking out J.D. Martinez after his first pitch went to the backstop and allowed Verdugo to score.

After the Red Sox took the lead, the Twins immediately responded with one out in the bottom half.

Gordon then lifted an 0-2 98 mph fastball to right field and his sixth homer caromed off a seat in the upper deck to give the Twins a 7-4 lead.

Sanchez added a drive to the third deck in left field off Jeurys Familia for an 8-4 lead in the sixth before the Twins scored their final two runs in the eighth.

Minnesota’s Chris Archer allowed four runs on five hits in 4 1/3 innings. He struck out three, walked two and was pulled after Pham’s single made it 3-2.