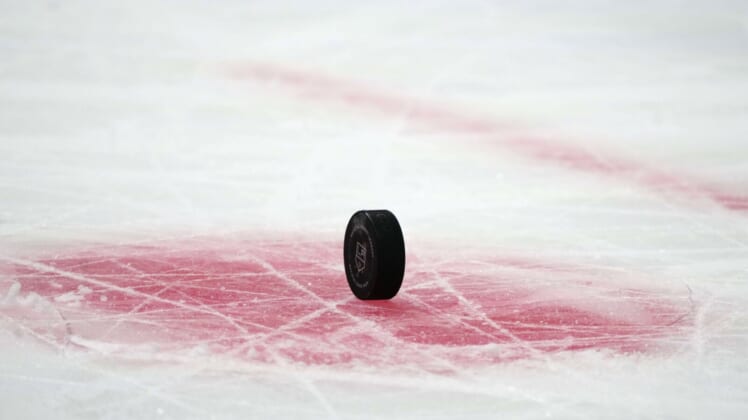 Oct 28, 2021; Los Angeles, California, USA; A detailed view of a NHL puck with the LA Kings logo in the first period of the game between the Winnipeg Jets and the Los Angeles Kings at Staples Center. Mandatory Credit: Kirby Lee-USA TODAY Sports

The NHL and the NHL Players Association have made the joint decision to press pause on the season for the holidays. This will allow as many players as possible to be at home with their families for Christmas. This decision comes alongside rapidly rising COVID-19 numbers, both within the NHL and the world as a whole.

The rapid spread of the Omicron variant has posed new issues for all major sports leagues as they attempt to navigate this tricky situation. The NHL has already postponed many games this season due to many players contracting the virus.

This means that all games that were scheduled for Thursday will be postponed until a later date. From December 23rd until December 26th the league will be on pause for all purposes.

How this impacts the Vegas Golden Knights?

The Golden Knights have two games left before Christmas and this newly announced pause will impact the second one. Their first is against the Tampa Bay Lightning tomorrow at home. As of now, that game is supposed to continue as planned. However, the game that was scheduled to be played on Thursday against the Los Angeles Kings has been postponed.

Therefore, the Golden Knights will start their holiday break a few days earlier than they would if nothing had been changed. They’ve been lucky to not have had their season seriously affected by COVID-19 thus far but will now get a few extra days of rest.

The Golden Knights will resume playing after the break on December 27th against the Colorado Avalanche in a clash of two of the best teams in the NHL.