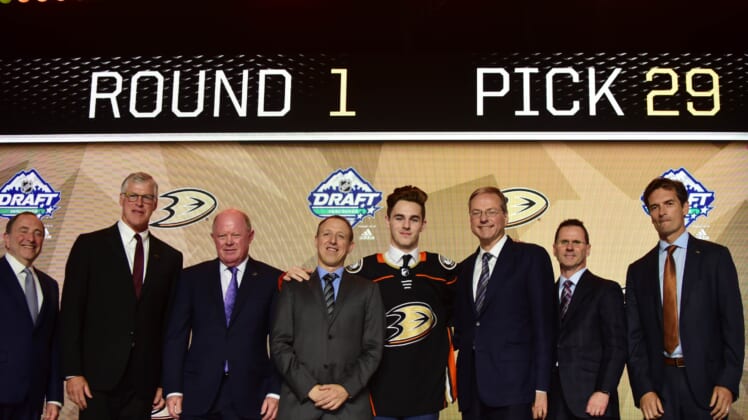 Jun 21, 2019; Vancouver, BC, Canada; Brayden Tracey poses for a photo after being selected as the number twenty-nine overall pick to the Anaheim Ducks in the first round of the 2019 NHL Draft at Rogers Arena. Mandatory Credit: Anne-Marie Sorvin-USA TODAY Sports

The NHL Draft Lottery starts at 8:00 PM EST Friday on NBCSN and NHL Network for U.S. audiences. In Canada you can catch the action on Sportsnet and TVA Sports.

Of course, many people are still confused how this will work considering there could be a phase two lottery later in August.

Gary Bettman stated the Draft Lottery will not just be for the seven teams left out of the Return to Play format. He also included the other eight teams that will be knocked out in the qualifying rounds as well. At this time, those teams will be labeled Teams A thru H.

If one of those teams wins the lottery, there will be a phase two drawing in August. Yes, we are all still confused. No one stands a better chance of winning it all with the Ottawa Senators having two very high lottery picks.

Alexis Lafreniere was born on October 11, 2001 in the town of Saint-Eustache, Canada. At an early age, he seemed to excel and looked destined to be a top draft pick in the NHL. The kid has all the makings to be an elite player in the league and has been under the microscope for years.

The term “generational talent” is sometimes overused when talking about potential first round picks but Lafreniere has a chance to be exactly that. Is he the next Sidney Crosby or Connor McDavid, who knows.

It also isn’t fair, but so far his skill sets, hockey IQ and vision make it him then everyone else in this upcoming draft. One thing is for sure, he is NHL ready, and whomever wins the No. 1 pick will be playing him immediately.