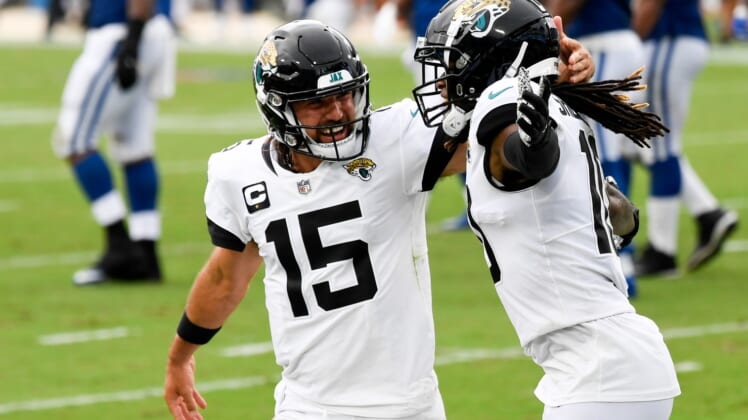 When the Indianapolis Colts and Jacksonville Jaguars took the field in Week 1, the NFL world thought these teams were headed in opposite directions. Instead, the 2020 season kicked off with a stunner as the Jaguars pulled off the first upset of Week 1.

The Colts, seen as a dark-horse Super Bowl contender, jumped out to an early lead. But the Jaguars kept hanging around on Sunday, showing the fight no one expected. Jacksonville clawed its way to keep the game close, providing Gardner Minshew with the chance to deliver some more magic after an incredible rookie season. Sure enough, he delivered.

Let’s examine the winners and losers from the Jaguars’ 27-20 upset win over the Colts in this Week 1 divisional clash.

Everyone expected the Jaguars to tank this season with the sole focus of landing Trevor Lawrence in the 2021 NFL Draft. If Minshew has anything to say about it, Jacksonville won’t even be in contention to tank for Lawrence. While many keep doubting Minshew, he keeps proving he deserves to be a starting quarterback.

Despite facing plenty of pressure in Week 1, Minshew held his own and made some big throws. While he didn’t rack up a ton of passing yards, he was Mr. Efficient against the Colts. The second-year quarterback completed 19-of-20 attempts with three scores and he was perfect on his final 15 passes. The Jaguars are 1-0 and Minshew is here to prove he can be the guy.

There’s a reason the Vikings cut Rhodes this offseason. Once one of the NFL’s shutdown cornerbacks, Rhodes became a shadow of his former self in 2019 and Minnesota got tired of it. The Colts took a chance on him as a reclamation project and they are quickly discovering Minnesota got it right.

The Jaguars came into the season recognizing this year would be about player development and seeing future studs emerge on this defense. Henderson, the No. 9 overall pick, showed incredible skills at Florida and Jacksonville’s front office believed he could become their next shutdown cornerback. We’re pretty confident they made the right selection.

Jacksonville threw him into the fire against the Colts. He lined up in coverage against T.Y. Hilton and held his own against a Pro Bowl receiver. Henderson wasn’t afraid to get physical in coverage and showed the savvy that great veterans have, getting away with some grabbing. Elite corners make plays in the biggest moments and Henderson’s deflection in the final seconds to seal Jacksonville’s win demonstrates what he is capable of.

The Colts came into this season with high expectations, dreaming of competing for the AFC South crown and potentially surprising everyone in the AFC. On paper, Indianapolis boasts the recipe to cause a lot of problems for its opponents. A brilliant head coach, a dominant offensive line and a balanced attack on offense. The front office hoped Philip Rivers would be the missing piece to make it all work.

So much for the preseason hype. Rivers played relatively well early in this game, hitting nine different receivers and moving the chains. Fittingly, it all came crashing down in the fourth quarter. On a potential go-ahead drive, the 38-year-old threw his second interception of the game. It gifted three points to the Jaguars, which made the difference in the closing seconds. At this point, an 8-8 record feels like the realistic outcome for the Colts.

When the Jaguars released Leonard Fournette, many assumed it was a sign of the team already waving the towel on the 2020 season. It turns out, Jacksonville just knew it had Robinson waiting in the wings. The undrafted free agent out of Illinois State earned the starting nod in Week 1 and made the most of his opportunities. He turned 16 carries into 62 rushing yards, easily making defenders miss and picking up chunks of yards on every touch. He was pivotal in Jacksonville’s comeback and could prove to be the next undrafted gem.