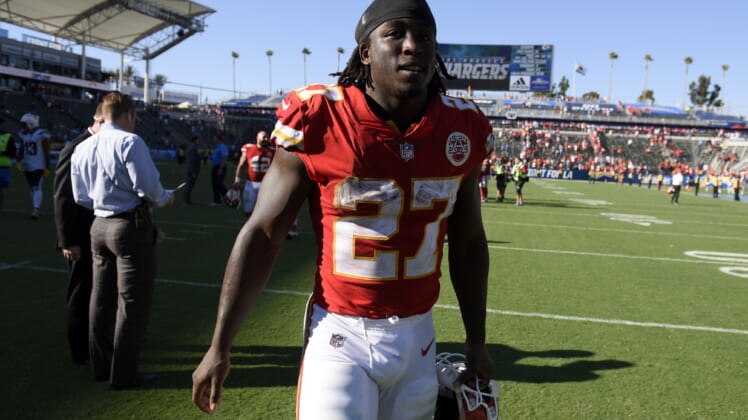 The NFL on Friday announced that it has suspended Cleveland Browns running back Kareem Hunt eight games for violating the league’s personal conduct policy.

Hunt’s suspension comes after he was caught on video attacking and kicking a woman back in February 2018.

Immediately after the video became public record, Hunt was placed on the NFL’s Commissioner’s Exempt List before being released by the Kansas City Chiefs. It was yet another damning domestic violence incident for a star NFL player.

Despite all of this, the Browns decided to sign Hunt back in February. This came after multiple teams showed interest in the NFL’s leading rusher from the 2017 season.

It’s yet another example of hypocrisy around the league. If Hunt weren’t so young and among the most-talented backs in the game, he’d still be unemployed. If he had tested positive for marijuana multiple times, the Pro Bowler would have been suspended indefinitely. Just ask Dallas Cowboys teammates Randy Gregory and David Irving as well as New England Patriots star Josh Gordon.

In announcing Hunt’s suspension, the NFL acknowledged that it conducted an extensive investigation before deciding on the ban.

“The findings followed a detailed investigation by the NFL, which included reviewing available law enforcement records, video and electronic communications, interviews with numerous witnesses, and multiple interviews with Hunt,” the league said.

Meanwhile, Hunt himself released a pretty standard statement following the announcement of his suspension.

“I want to again apologize for my actions last year,” Hunt said in a statement, via NFL Media. “I know that my behavior hurt a lot of people, and I again apologize to them. I respect the league’s decision on discipline, and I appreciate the time I spent with Commissioner [Roger] Goodell last week.”

It’s almost like these two statements were coordinated. What a spectacularly clean early Friday morning news dump from the league.

All the while, players are being suspended longer for smoking marijuana — some as a way to manage the pain that comes with playing football. Others, because they don’t want to use opioids.

The NFL’s double standards are vast. Get caught on video kicking a woman and get suspended eight games. Smoke a substance that’s already legal in multiple states for recreational use and get an indefinite ban.

And it’s a bad example to set for football fans — primarily children — the world over.