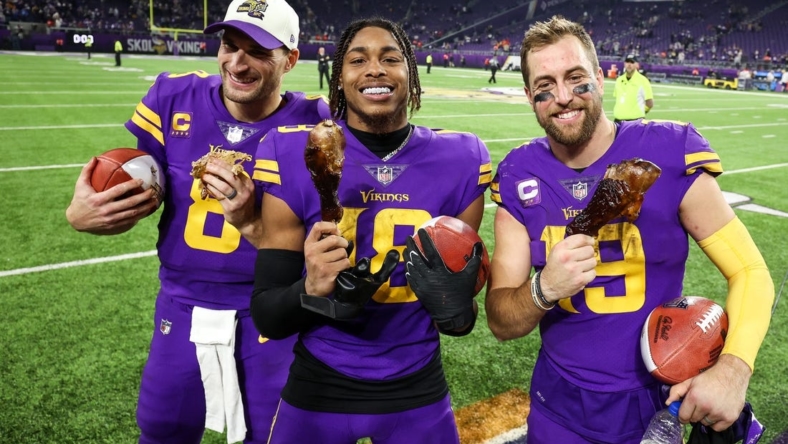 Kirk Cousins threw for three touchdowns, including the game-winner to Adam Thielen, as the Minnesota Vikings earned a 33-26 win over the New England Patriots on Thursday night in Minneapolis.

Cousins, who capped the scoring with a 15-yard TD pass to Thielen with 9:34 left to play, completed 30 of 37 passes for 299 yards and an interception for the Vikings (9-2). Justin Jefferson hauled in nine catches for 139 yards and a touchdown, and Dalvin Cook rushed 22 times for 42 yards.

Jefferson finished the night with 4,248 receiving yards, the most ever for a receiver in his first three NFL seasons. The old mark was set by another Viking, Randy Moss, who amassed 4,163 receiving yards from 1998-2000.

Patriots quarterback Mac Jones was also impressive, finishing with a career-high 382 yards and two touchdowns on 28-for-39 passing, as New England (6-5) saw its three-game winning streak come to an end.

Prescott completed 21 of 30 passes for 261 yards and overcame two interceptions for Dallas (8-3), which moved into sole possession of second place in the NFC East. Peyton Hendershot added a rushing score, CeeDee Lamb caught six passes for 106 yards and Micah Parsons registered two sacks to raise his season total to 12.

Daniel Jones completed 21 of 35 passes for 228 yards and one touchdown for the Giants (7-4), who lost for the third time in four games. Saquon Barkley rushed for a touchdown but had just 52 scrimmage yards (39 rushing, 13 receiving).

Allen passed for 253 yards and two scores and was intercepted once and also rushed 10 times for 78 yards and another touchdown. Isaiah McKenzie caught six passes for 96 yards and a touchdown for the Bills (8-3). Buffalo linebacker Von Miller was carted off late in the first half with a knee injury.