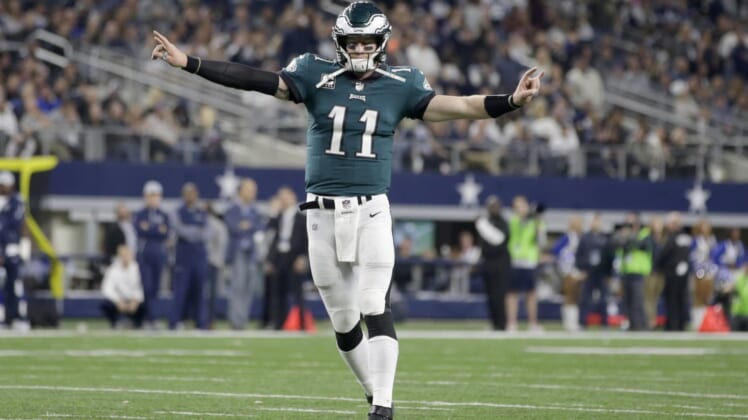 Las Vegas doesn’t always get it right. We’ve seen Sin City and its sportsbooks lose some major money in the past. But the world’s gambling Mecca seems to have a nice pulse on what’s happening in the sports community.

Just recently, the huge sportsbook Bovada released its odds for the 2018 NFL MVP. Some of the names at the top, primarily Aaron Rodgers and Tom Brady, make a ton of sense. They are annual contenders for the NFL’s top individual honor.

Though, it’s the presence of young quarterbacks Carson Wentz and Jimmy Garoppolo in the top six that seems to be rather surprising.

As a sophomore last season, Wentz was among the top NFL MVP candidates prior to going down with a torn ACL in December. All said, Wentz threw 33 touchdowns compared to seven interceptions en route to leading the eventual Super Bowl champion Philadelphia Eagles to an 11-2 record in 13 starts.

Despite this, Wentz was sidelined for the Eagles’ Super Bowl run with journeyman Nick Foles leading the team to the Lombardi. Does that impact how people value Wentz right now? We’re not too sure.

Garoppolo’s presence among the top six is even more shocking here. He’s right up there with former league MVPs Cam Newton and Matt Ryan despite having started a grand total of seven games throughout his career.

Recently rewarded as one of the highest-paid quarterbacks in the NFL, Garoppolo was 5-0 as a starter after the San Francisco 49ers acquired him from New England midway through the 2017 campaign. He led San Francisco to wins against three playoff teams during that span, averaging nearly 30 points per game in the process. The 49ers’ defense also yielded nearly a touchdown less per game than it did prior to Garoppolo’s arrival. San Francisco was 1-10 in the 11 games Garoppolo did not start.

In what has to be considered a quarterback-driven league, the top-17 odds all go to players at that position. The first non-quarterbacks to make the list are Le’Veon Bell, Todd Gurley and David Johnson, all with 40-to-1 odds.

The moral of the story? If you’re going to bet on the 2018 NFL MVP, make sure to go quarterback.