New York Yankees catcher Gary Sanchez slumped during the shortened 2020 campaign. However, there's reason to believe he'll bounce back in a big way in 2021. 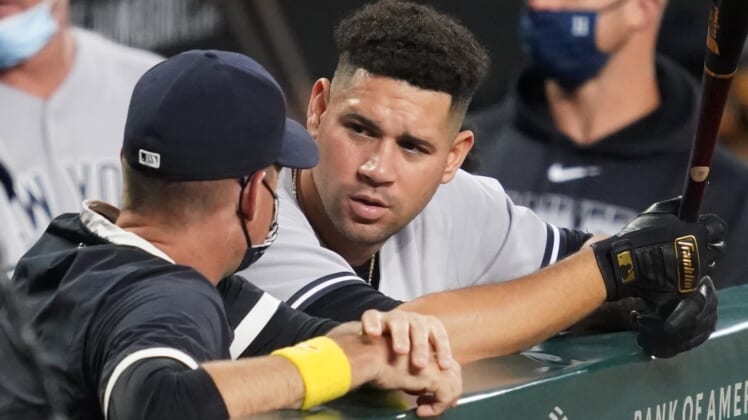 The 2020 season was a challenging one for New York Yankees catcher Gary Sanchez. He struggled particularly on offense as well as defense, to the point that he lost his starting job in the playoffs to career backup Kyle Higashioka.

No disrespect to Higgy, but the Yankees’ catching job is Sanchez’s to lose, and rightfully so. He doesn’t deserve the treatment he’s received in the last few months.

The Yankees’ catcher is a prime candidate to have a bounce-back season in 2021, and now we’ll take a look at why that is.

When analyzing Sanchez’s season, we need to consider that it wasn’t a typical campaign, with 60 games instead of 162. There is a lot more room for weird lines in small sample sizes, as some stats take dozens, even hundreds of at-bats to stabilize.

For example, Christian Yelich of the Milwaukee Brewers slashed .205/.356/.430 in 2020 after two years of MVP-caliber performance. Donovan Solano hit .326/.365/.463. Is the latter better than the former? No. Yelich should experience a huge resurgence and prove far superior this coming year and beyond.

Before writing him off as a colossal bust like many Yankees’ fans are doing, I’d like to take a look at some crucial Gary Sanchez stats from 2019. They’re the most appropriate sample to judge his performance, because he played 106 games and had 446 plate appearances. That year, he logged a slash line of .232/.316/.525 with 34 home runs and 116 Weighted Runs Created Plus (wRC+). That’s the type of line I can see him putting next season.

So what happened there? Why did Sanchez strike out so much more if he failed to make contact with pitches at a very similar rate to 2019?

It could be some randomness associated with the relatively small sample size, or it could also be an approach problem. A little bit of both is likely.

If your 2020 included catching a New York Yankees game to see Sanchez take an at-bat, you know that he often let fastballs in the zone go by for strike one, and once he was down in the count, he chased breaking balls in the dirt more often than our hearts could bear. That’s an approach problem that could be solved with work and discipline to avoid pressing at the plate.

Gary Sanchez’s BABIP was comically low, even for a slow player

Look, I get it. The Yankees surely get it, too: Sanchez is a slow player. And since he hits so many fly balls (some of them home runs), his batting average on balls in play (BABIP) will never be high. It’s not even close to .280 at this stage of his career.

Teams love to shift against him, too, as Jeff Zimmermann of FanGraphs suggests, further lowering the 28-year-old’s ceiling in this particular stat. But a .159 BABIP? Excuse me, but there is just no way that happens again in 2021. Again, with a far greater sample size, that stat shouldn’t be such an outlier.

The return of 2019 Gary Sanchez is indeed possible. That man had a .244 BABIP, which is much more realistic given how hard he hits the ball (more on that later). I’m sure the Yankees would love to get that Gary back, when he earned the second of his All-Star selections.

Sanchez is no below-average batter. He has a career 117 wRC+, and while it’s unlikely he reaches the 130 wRC+ mark again on any kind of consistent basis, given his track record of success, power, age, talent, he can return to a 115 wRC+ or close to it over a larger sample.

When Gary Sanchez did hit the ball in 2020, it was loud

He may have his issues with sliders, and his overall approach may need refinement. But make no mistake: Gary Sanchez can punish baseballs.

The Yankees love their mashers and Statcast darlings. After all, they have the two kings of hitting the ball hard in Giancarlo Stanton and Aaron Judge. But Sanchez is no slouch himself.

For all his 2020 struggles, the Bronx Bombers’ catcher ranked in the 89th percentile in average exit velocity (91.8 mph) and in the 92nd percentile in hard-hit rate (50%). Additionally, his 17.4 barrel percentage was in MLB’s top 3%. Those are excellent signs for the future.

Another fantastic sign for Sanchez’s 2021 outlook is his 99 mph average exit velocity in line drives and fly balls, enough to rank him fifth in all of baseball — and ahead of superstars like World Series MVP Corey Seager, Nelson Cruz, Yelich, Jose Abreu, Mike Trout, and many more.

Yankees’ general manager Brian Cashman said this week that the catcher is the “heir apparent” to open the season as the starter, so again: it’s Sanchez’s job to lose.

If he makes a couple of adjustments at the plate — entirely plausible — and keeps hitting the ball hard, the playing time and production will be there for Sanchez to have a rebound season in 2021. Gaining confidence at the dish should also feed into improved defense behind the plate, as Sanchez will be less preoccupied with a hitting slump.