Jim Harbaugh making a return to the NFL has been rumored for weeks, and it looks like an investigation by the NCAA may be the latest reason for the Michigan head coach to head back to the professional ranks.

The Michigan Wolverines had a stellar season in 2022. In Jim Harbaugh’s eighth year leading his legendary alma mater, the football program went unbeaten during the regular season and scored a memorable victory over hated rival Ohio State. It was the first time Harbaugh led the team to a 13-win season and a playoff appearance during his time as the top football coach.

However, the season came to a stunning end in the College Football Playoffs when the Michigan Wolverines were upset by the TCU Horned Frogs on New Year’s Eve, 51-45. It was a disappointing finish as the team was on the wrong side of history as the first program to lose to an underdog in the CFP. Another season without reaching a national championship game has led to speculation Jim Harbaugh could be on the way out.

In recent weeks, there have been reports that several NFL teams have either talked to or are interested in courting Harbaugh to be their next head coach. Including the Denver Broncos and Carolina Panthers. On Thursday, Harbaugh boldly claimed he intends to stay in Michigan but he may have a serious reason to consider jumping ship now instead of being hit with severe penalties next season.

While Jim Harbaugh “expects” to be back in Ann Arbor next year, success in 2023 may be hampered well before his team even hits the field. This week, ESPN reported that the NCAA has opened an investigation into the coach and the Michigan Wolverines football program.

The report revealed that Jim Harbaugh may have a Level I — the most serious — and several Level II NCAA violations.

“The violations include alleged impermissible contact with recruits during the NCAA-mandated dead periods, as well as the use of a defensive analyst for on-field coaching activities, a rules violation. Harbaugh’s cooperation with NCAA enforcement staff during the investigation is also being examined. Harbaugh could face penalties that include a multigame suspension, sources said.”

Winning a national championship was the reason why the 59-year-old was brought in to be the Michigan football coach after an impressive run leading the San Francisco 49ers. However, if those chances could be damaged heading into next season, and there is high-level interest from the NFL, now may be the perfect time for Jim Harbaugh to take his talents back to the pro level. 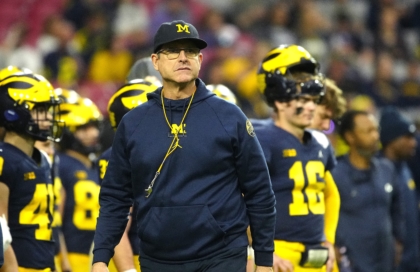 Similar to what Pete Carroll did when he ditched the USC Trojans for the Seattle Seahawks right before the program was set to be hit with major penalties and sanctions for rules violations.