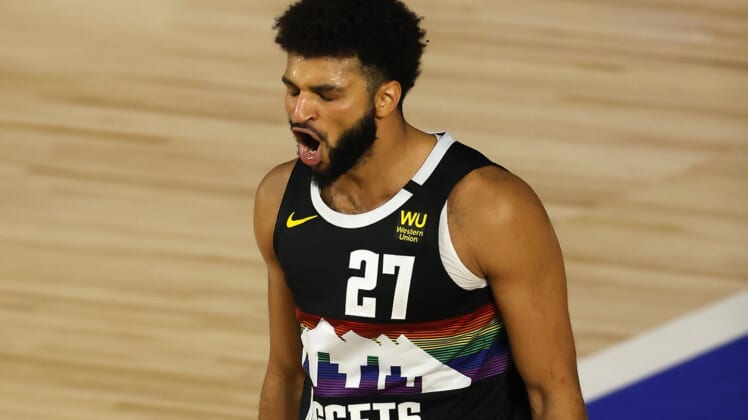 Aug 25, 2020; Lake Buena Vista, Florida, USA; Jamal Murray #27 of the Denver Nuggets reacts after a shot during the fourth quarter against the Utah Jazz in game five of the first round of the 2020 NBA Playoffs at ESPN Wide World of Sports Complex. Mandatory Credit: Mike Ehrmann/Pool Photo-USA TODAY Sports

The Denver Nuggets’ season was on the line Tuesday night at Walt Disney World in Orlando. Down 3-1 in their first-round playoff series against the Utah Jazz, these Nuggets needed one of their stars to step up.

Guard Jamal Murray more than responded when his team needed it the most.

Down nine at halftime and by as much as 15 early in the third quarter, Denver came storming back en route to a thrilling 117-107 victory.

This win sets up an important Game 6 between Utah and Denver Thursday. It also had people talking after Murray dropped an absurd 33 points in the second half and 42 points for the game two days after he scored 50.