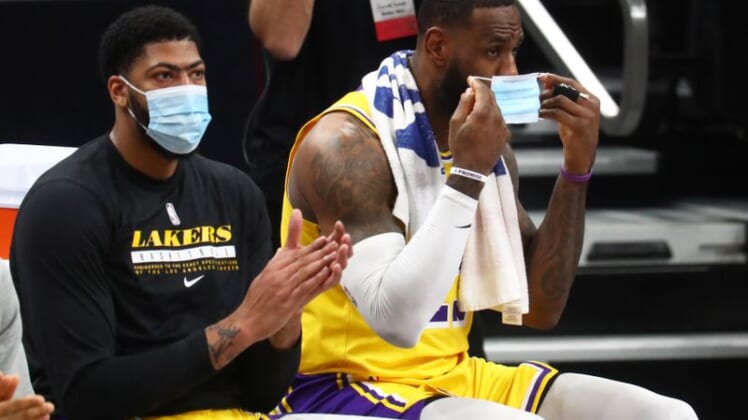 (Reuters) – NBA players should stay at their residences when they are at home and in their hotels when on the road for at least the next two weeks, the league said on Tuesday in a list of new health protocols designed to limit COVID-19’s impact on the season.

The league, which postponed one game on Sunday and three games this week due to the virus, is trying to avoid a league-wide suspension of play like the one that derailed it in March before it returned in a “bubble” environment in Orlando in July.

The NBA said the new protocols, which take effect immediately, were issued “in response to the surge of COVID-19 cases across the country and an uptick among NBA teams requiring potential player quarantines.”

Players and team staff can leave their homes to attend team-related activities, exercise outside, perform essential activities, or as a result of extraordinary circumstances, the protocols said.

While at hotels, players and team staff are prohibited from leaving except for team activities or emergencies. They are also barred from interacting with non-team guests.

Players and coaches must wear face masks at all times on the bench and in the locker room, according to the protocols, which were endorsed by the players’ union.

“Upon exiting the game, and prior to returning to the bench, players can sit in ‘cooldown chairs,’ arranged at least 12 feet from the bench with each chair 6 feet apart, where facemasks are not required,” according to the protocols.

Players must also limit their pre- and post-game interactions to elbow and fist bumps and maintain six feet of distance as much as possible.

Elsewhere the rules limited the length of team meetings, mandated that massages and physical therapy at a hotel occur in a ballroom or other large open space, and prohibited players from arriving at the arena more than three hours before tip-off.

The league on Sunday said it had no plans to put its season on hold, as teams struggle to make available a league-mandated eight-man roster for games due to injuries and COVID-19 contact tracing.

The league said its rules may be additionally amended during the 2020-2021 season “as the ongoing COVID-19 pandemic evolves.”