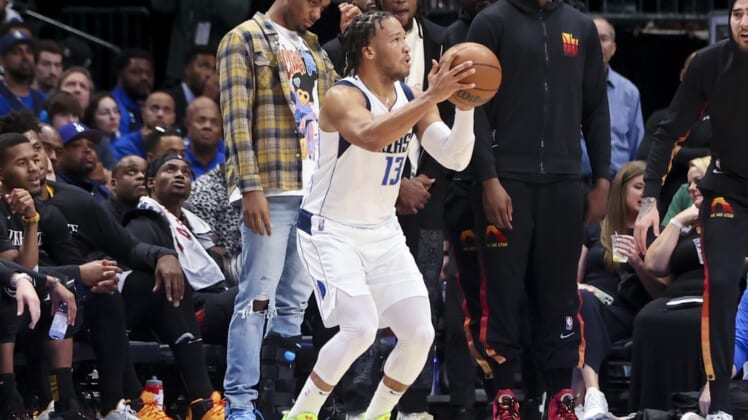 Jalen Brunson exploded for 41 points, Maxi Kleber added 25 and the host Dallas Mavericks were on fire from outside to overcome superstar Luka Doncic’s absence in a 110-104 win over the Utah Jazz on Monday night.

The teams’ first-round Western Conference playoff series is tied at one win apiece heading to games in Salt Lake City on Thursday and Saturday.

Kleber scored all but one of his points from beyond the arc, shooting 8-for-11 from 3-point range, and Brunson made six treys. Dallas hit 22 of 47 attempts (46.8 percent) from long distance, while Utah connected on 11 of 29 (37.9 percent) from outside. Dallas’ Spencer Dinwiddie contributed 17 points and six assists, while Reggie Bullock put up 11 points.

Donovan Mitchell scored 34 points, Bojan Bogdanovic had 25 and Jordan Clarkson added 21 for the Jazz, who were unable to maintain the lead they held for most of the second half when it counted most.

Stephen Curry came off the bench to score 34 points in 23 minutes and Jordan Poole again stood out with 29 points and eight assists as Golden State posted a convincing victory over Denver at San Francisco.

Klay Thompson added 21 points as the Warriors took a 2-0 lead in the Western Conference first-round series. Andrew Wiggins had 13 points and eight rebounds for Golden State, which won the first two games by an average of 18 points.

Nikola Jokic recorded 26 points and 11 rebounds for the Nuggets before drawing his second technical foul and earning an ejection with seven minutes remaining.

Joel Embiid had 31 points and 11 rebounds to lift host Philadelphia past Toronto to take a 2-0 lead in their Eastern Conference opening-round playoff series.

Tyrese Maxey added 23 points, nine rebounds and eight assists, Tobias Harris contributed 20 points and 10 rebounds and James Harden chipped in with 14 points as the Sixers defended their home court with a pair of wins. It was the 100th career playoff win for head coach Doc Rivers.

OG Anunoby led the Raptors with 26 points, Fred VanVleet added 20 and Pascal Siakam had 20 points and 10 rebounds. Chris Boucher also scored 17. The Raptors played without Scottie Barnes, who suffered an ankle injury in Game 1 when Embiid landed on him.