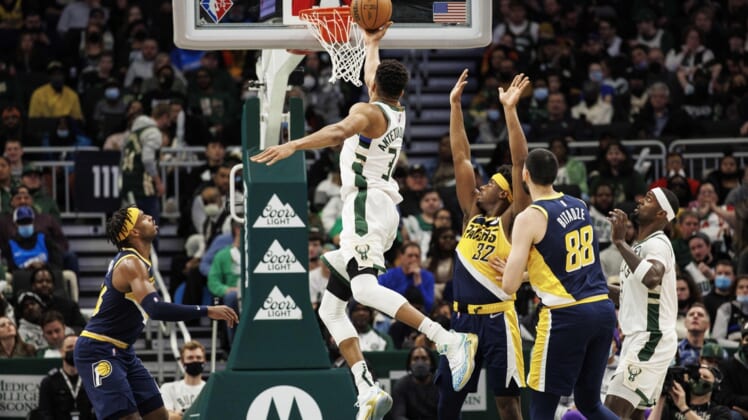 Giannis Antetokounmpo scored a season-high 50 points as the Milwaukee Bucks earned a 128-119 win over the visiting Indiana Pacers on Tuesday night to complete a four-game sweep of the season series.

Milwaukee shot over 50 percent from the field for the fifth time in the past seven games, cashing in on 48 of its 86 shots (55.8 percent).

Buddy Hield paced Indiana with 36 points and hit 8 of 12 shots from behind the 3-point arc. Tyrese Haliburton recorded 17 points and eight assists for the Pacers, who took their seventh loss in a row.

Aaron Nesmith contributed 18 points, Grant Williams scored 12 and Derrick White had 11 for the red-hot Celtics, who won their ninth game in a row. However, Boston lost Marcus Smart due to a first-half ankle injury.

The Sixers again played without James Harden, who was acquired Thursday from the Nets. Paul Millsap, also picked up from Brooklyn, made his debut to open the fourth quarter, and he scored nine points in nine minutes. Joel Embiid posted team highs of 19 points and nine rebounds.

Mikal Bridges recorded 19 points and nine rebounds as the Suns won their sixth consecutive game and 17th in the past 18. Deandre Ayton added 12 points and 12 rebounds.

Marcus Morris Sr. scored 23 points and Nicolas Batum added 18 points and seven rebounds for the Clippers, who have lost four of their past six games. Reggie Jackson had 14 points and eight assists, and Ivica Zubac registered 12 points and 13 rebounds.

Karl-Anthony Towns had 39 points and 15 rebounds as Minnesota rallied from a 13-point, fourth-quarter deficit to beat Charlotte in overtime at Minneapolis.

Towns, who logged seven points in the extra session, scored with 1:57 left to put the Wolves ahead 120-113. Minnesota secured the victory at the foul line in the final minute and extended its home winning streak to seven games.

Luka Doncic had 21 points, 10 rebounds and six assists, helping Dallas rally from a 13-point, third-quarter deficit to win at Miami.

Jalen Brunson and by Maxi Kleber each scored 19 points for Dallas, a season high for Kleber, who also had a game-high five blocked shots. The Mavericks improved to 5-1 in their past six games.

Jaren Jackson Jr. scored 23 points and Brandon Clarke had 18 as Memphis overcame the absence of Ja Morant (ankle) to win for the ninth time in 10 games.

CJ McCollum scored 30 points, Jonas Valanciunas had 19 and Brandon Ingram put up 18 for the Pelicans, who have lost three of their past four games.

Trae Young scored 41 points — his fifth game with 40-plus points this season — to lead Atlanta to a win over visiting Cleveland.

Young was 13 of 22 from the floor, including 4 of 7 from long distance. Danilo Gallinari scored a season-high 25 points for the Hawks, who had lost four of their previous five games.

Cleveland was led by Darius Garland, who scored 30 points and added eight assists. Evan Mobley contributed 22 points and 10 rebounds for the Cavaliers, who have lost two straight.