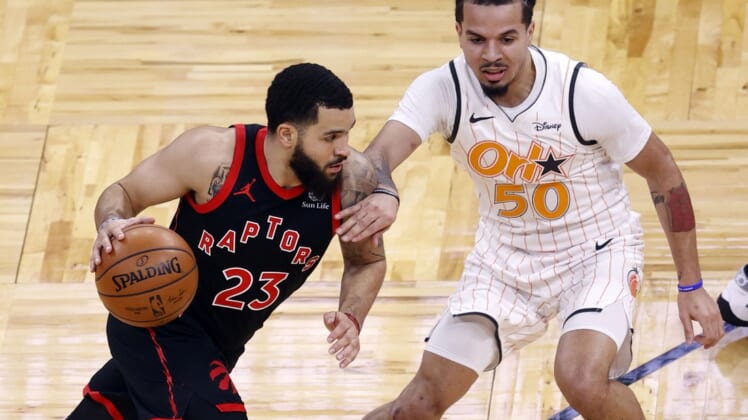 Fred VanVleet set a club record with 54 points, including a career-best 11 3-pointers in 14 attempts, as the visiting Toronto Raptors defeated the Orlando Magic 123-108 on Tuesday night.

Toronto’s previous club record was 52 by DeMar DeRozan. VanVleet’s 54 points were the most ever by an undrafted NBA player, surpassing the 53 scored by Moses Malone of the Houston Rockets against the then-San Diego Clippers in 1982.

VanVleet scored 17 points in the first quarter and had 28 points by halftime, as he went 8-for-9 from beyond the arc in the first half. The team record for 3-pointers in a game is 12, set by Donyell Marshall in 2005. He wound up making 17 of 23 shots from the floor, including 11 of 14 from long range.

Kyle Lowry added a triple-double with 14 points,10 rebounds and 10 assists for the Raptors. Nikola Vucevic had 21 points and 18 rebounds for the Magic, and Evan Fournier also scored 21 points.

Kevin Durant added 28 points and nine rebounds for the Nets, who shot 57 percent from the floor. James Harden posted his fourth triple-double with the Nets and the 50th of his career by totaling 23 points, 14 assists and 11 rebounds.

Kawhi Leonard scored 33 points for the Clippers, who saw a three-game winning streak stopped and lost for only the second time in their past 12 games. Paul George added 26 and Nicolas Batum contributed 21 for Los Angeles.

Donovan Mitchell scored 32 points, Bojan Bogdanovic hit late back-to-back 3-pointers and Utah held on to defeat Detroit in Salt Lake City. The Pistons made a furious push to pull within four points late in the fourth quarter after trailing by as many as 28 points.

Bogdanovic’s late 3-pointers gave the Jazz 16 on the night, helping them set an NBA record. Utah has now made at least 15 treys in 11 straight games, surpassing the mark set by the Houston Rockets (2018-19 and 2019-20). The Jazz’s Mike Conley scored 20 points while had Bogdanovic 18.

Jerami Grant sparked the Pistons’ late surge and finished with 27 points. Mason Plumlee contributed 17 points and 14 rebounds, and Josh Jackson fired in 22 points off the bench for Detroit, which is 1-9 in road games.

Washington’s Bradley Beal, the NBA scoring leader, made six 3-pointers and poured in 37 points to raise his average to 35. Rui Hachimura scored a season-high 24 points, and Russell Westbrook recorded 17 points, 12 rebounds and 10 assists for his 151st career triple-double.

Domantas Sabonis made 13 of 15 shots from the floor for a career-high-matching 32 points and Indiana led visiting Memphis wire to wire in Indianapolis.

The double-double was Sabonis’ 19th on the season in 21 games. Myles Turner also posted a double-double with 22 points and 11 rebounds while Malcolm Brogdon finished with 23 points and seven assists. Jeremy Lamb shot 5-of-7 from 3-point range and scored 19 points.

Dillon Brooks finished with a team-high 25 points while Desmond Bane added 12 for the Grizzlies, whose seven-game winning streak ended.

Kemba Walker responded after one of the worst performances of his career with 19 points and Jayson Tatum had a team-high 27 as Boston outlasted Golden State in San Francisco.

In the opener of a five-game trip that followed a tough 96-95 home loss to the Los Angeles Lakers on Saturday, the Celtics used a 15-2 fourth-quarter burst to turn a 94-91 deficit into a 10-point lead with four minutes remaining.

Jaylen Brown finished with 18 points, Williams 15 and Tristan Thompson 13 for the Celtics, who had lost two straight and were playing without Marcus Smart, who injured his calf in Saturday’s loss. Stephen Curry hit seven 3-pointers on a 38-point night for the Warriors, who lost for the second time in their past three games.