NASCAR predictions across all three levels for 2022

The 2022 NASCAR season is here and it's time to make predictions. These are our entire season predictions for the Cup, Xfinity, and Truck Series. 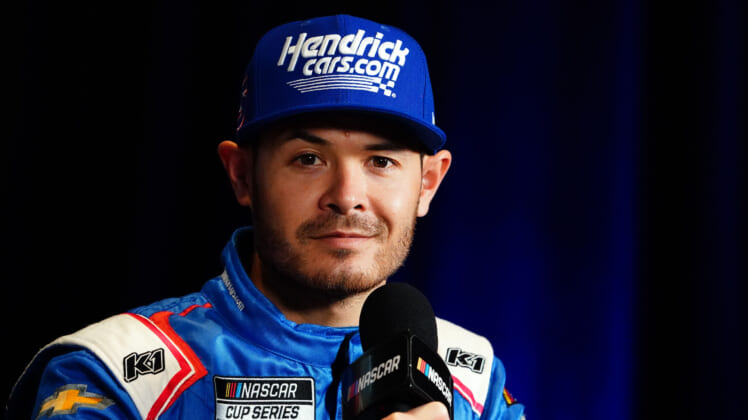 The 2022 NASCAR season is upon us and it marks the start of two new eras. The NASCAR Cup Series and Truck Series each feature new car and truck bodies while the Xfinity Series sees a field stacked more than ever.

Check out our NASCAR season predictions for all three series below!

Each section will include the order of the playoff grid, wins, and playoff points for each driver.

Kyle Larson continues his reign as regular-season champion while winning the most races during the first 26-events. Chase Elliott takes homes the prestigious Daytona 500, while William Byron wins the Coca-Cola 600 in the No. 24 car.

Austin Cindric struggles on ovals in his first year with Team Penske but still easily wins the Rookie of the Year Award due to Harrison Burton and Todd Gilliland struggling in their rookie seasons.

Ty Gibbs continues his great racing from 2021 and wins the regular-season championship in his first year as a full-time driver. Daniel Hemric wins the first race at the newly paved Atlanta Motor Speedway, while A.J. Allmendinger wins in Portland.

John Hunter Nemechek continues his success as he wins his second straight regular-season championship. Tyler Ankrum is this year’s breakout driver with the most improvement after winning two races with Hattori Racing.

Carson Hocevar misses the playoffs due to Derek Kraus’ victory while Matt DiBenedetto is a notable big name who is not able to qualify on points.

NASCAR playoffs: First round for each series

NASCAR Cup Series: Round of 16

Larson continues his playoff dominance while Elliott finally wins his first non-superspeedway oval race since November 2020. Harvick sees a strong first round while Blaney sneaks in with his struggles.

Bowman is this year’s big surprise to be eliminated in the Round of 16 after not having a victory throughout the season. Other drivers to miss are more predictable for a first-round exit.

NASCAR Xfinity Series: Round of 12

Gibbs dominates the Round of 12 while a non-playoff driver wins at Talladega. Berry falls a little bit due to the Talladega race but manages to stay ahead of Creed for the final cut-off spot.

Mayer is the big name to be eliminated in this round after a struggle at the Charlotte ROVAL. However, all four drivers who did not make it were arguably the bottom four drivers when the playoffs began.

NASCAR Truck Series: Round of 10

Eckes ends the Round of 10 with the most playoff points due to this round being his strength. Enfinger wins the first race back at Lucas Oil Raceway while Ankrum sneaks in after struggling.

Crafton does not advance to the next round even though this round could be good for him. Kraus also misses out but his performances keep him near the cut-line until the final race of the round.

Related: The best NASCAR races ever: From the Daytona 500 to Talladega 500

NASCAR playoffs: Second round for each series

NASCAR Cup Series: Round of 12

Byron snags his first playoff victory while Elliott gets back to his winning ways at the Charlotte ROVAL. Larson and Busch fail to win in this round but safely advance to the Round of 8.

Logano, Harvick, and Truex headline a very stacked round of eliminations after Talladega turns the standings upside down. Busch’s ceiling is reached for 23XI Racing’s first playoff appearance.

NASCAR Xfinity Series: Round of 8

Berry pulls off the most “surprising” win of the round and clinches his spot in the Championship 4 while Gragson and Hemric each come home victorious too. Gibbs easily makes the next round due to points.

Allgaier and Allmendinger face disappointment after a year below expectations. Berry’s victory made it very difficult to advance while Jones and Creed sit far below the cut-line.

NASCAR Truck Series: Round of 8

Ankrum pulls off the most surprising victory of the Truck playoffs at Homestead and pushes good drivers out. Smith wins at Las Vegas while Nemechek and Enfinger make the next round due to stage points.

Friesen is essentially knocked out due to Ankrum’s win with Eckes, Rhodes, and Smith all very close together. The Round of 8 is very tight, but Ankrum’s victory is the stamp to their elimination.

NASCAR playoffs: Third round for each series

NASCAR Cup Series: Round of 8

Larson and Hamlin casually take home victories while Reddick pulls off the major upset at Homestead for his first surprising Championship 4 berth. Busch sneaks in on points after holding on during the final race.

Elliott and Byron came into the round very hot but found themselves looking from the outside after Reddick’s win shakes the entire NASCAR world. Blaney and Bell put up good efforts, but not good enough.

Hamlin finally gets it done in the top level of racing and clinches his first NASCAR Cup Series championship. He holds off Larson and Busch on the final restart while Reddick is mired back in the top-10 positions.

Hamlin caps off the year with five victories, including the final race, while Larson wins the most with seven races total after a 2021 season with 10 victories.

Gibbs puts on a clinic at Phoenix to win his first NASCAR Xfinity Series championship. He puts some distance on Gragson and Berry as they fight for second place with Hemric close behind.

Gibbs finishes the year with eight total victories and proves why he has a very bright future in NASCAR. The other playoff contenders put up a good fight, but it’s no match for Gibbs in 2022.

Smith replicates his performance from last year’s championship race and finds himself winning his first NASCAR Truck Series championship. Gibbs holds off Enfinger and Nemechek in a very tight battle as Ankrum is behind.

Smith finishes the year with three victories, but Nemechek has the most overall with five wins. Both Kyle Busch Motorsports drivers move up to the Xfinity Series in 2023.

Related: Greatest drivers in the history of the Daytona 500