Denny Hamlin and FedEx's contracts with Joe Gibbs Racing are reportedly set to expire at the conclusion of the 2023 NASCAR season. 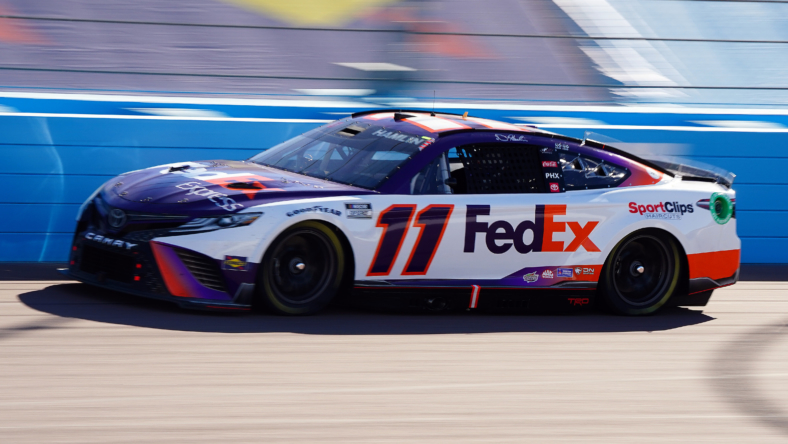 NASCAR silly season is winding down as moves such as Ty Gibbs and Ryan Preece to the Cup Series fill most of the remaining questions at the sport’s top level. However, it is never too early to look forward.

According to Sports Business Journal’s Adam Stern on SiriusXM NASCAR Radio, both Denny Hamlin and FedEx’s contracts with Joe Gibbs Racing will expire at the conclusion of the 2023 season. This comes as the organization’s lineups have been a hot topic lately.

Hamlin and FedEx have been together since the 2005 season when he took over the No. 11 car for Joe Gibbs Racing at Kansas Speedway. The partnership will be entering its 18th full season together in 2023.

Hamlin has been one of NASCAR’s most notable drivers over the past few seasons due to his competitiveness on the track and his role as the owner of 23XI Racing with Bubba Wallace and now Tyler Reddick.

The 41-year-old driver has won at least two races in seven of the last eight seasons with multiple Crown Jewel victories that will make him a first-ballot Hall-of-Fame member in the future.

Compared to other drivers, Hamlin’s age is not that bad for a driver as Kevin Harvick has won 23 races past his 42nd birthday. It’s more so staying competitive before that sudden drop in performance.

This has been talked about by Hamlin who said he does not want his performance to decline to where he can’t win every week on Dale Earnhardt Jr.’s podcast. Also, the driver of the No. 11 car said he would like to win his final start. Notably, Hamlin stated he would like to retire with FedEx at Joe Gibbs Racing but if the sponsor didn’t extend, it could change the course of the final stages of his career. Perhaps, he could drive for 23XI Racing if sponsorship is different.

However, the next portion of his career will likely be determined by FedEx’s commitment. It certainly appears that Hamlin will stay unless the sponsor leaves but it could all be moot if he wins the 2023 NASCAR Cup Series championship, for example.

Joe Gibbs Racing has already gone through one stressful negotiation process with Kyle Busch so hopefully, this process can run smoothly and everyone is on the same page moving forward.