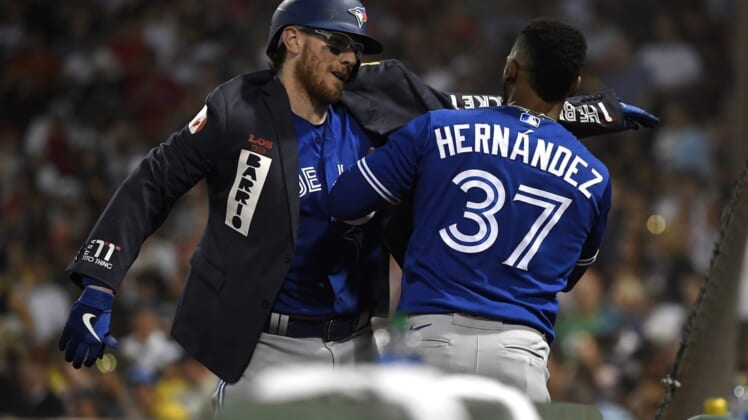 The 28 runs scored and 29 hits were both Toronto club records. The 28 runs allowed were the most ever by the Red Sox.

Mariners All-Star Julio Rodriguez, the rookie who became a sensation when he reached the final of the Home Run Derby earlier in the week, was a late scratch with left wrist soreness.

Ty France homered for Seattle, which fell a game shy of tying the franchise record for most consecutive victories set in 2001. Urquidy (9-4), a right-hander who had lost his three previous starts against Seattle this season, allowed one run on four hits. Hector Neris worked the ninth for his first save of the season.

Aaron Judge belted a pair of homers, giving him a best-in-the-majors 36 this season, to help New York defeat host Baltimore.

Judge launched his second three-run homer in as many days in the third inning and crushed a solo shot in the fifth. Joey Gallo added a solo homer as the Yankees beat Baltimore for the 10th time in 14 meetings. Lucas Luetge (3-3) picked up the win after allowing one hit over 2 1/3 scoreless innings in relief of starter Jameson Taillon.

Anthony Santander launched a three-run homer off Aroldis Chapman in the seventh inning, but Clay Holmes got the final five outs — three via strikeout — to secure his 17th save of the season. Yankees reliever Michael King left in the eighth inning with an arm injury.

Kyle Schwarber hit a solo home run for the Phillies, who had their three-game winning streak snapped. The Phillies swept a three-game series on the road against the Miami Marlins before the All-Star break.

Yu Darvish took a shutout into the seventh inning while pitching seven stellar innings and bested Max Scherzer as visiting San Diego opened the second half with a victory over New York.

Darvish (9-4) improved to 5-0 in eight career starts against the Mets and won his third straight start against the NL East leaders. Darvish allowed two of his four hits to Starling Marte and struck out nine, walked one and threw 99 pitches.

Scherzer (6-2) allowed two runs and five hits in six innings. He also struck out eight and walked one in his fourth start since returning from an oblique injury July 5.

Diaz went 1-for-3 with a fourth-inning double that broke open a 2-1 game. He also walked twice. Rasmussen (6-3) scuffled through five innings but only surrendered one run. Francisco Mejia was 2-for-4 with a double, two RBIs and two runs for the Rays.

Luis Urias delivered a walk-off single in the bottom of the 13th inning to give Milwaukee a victory over visiting Colorado in the opener of their four-game series.

With pinch runner Jonathan Davis aboard at second to open the 13th, Jake Bird (1-2) intentionally walked Kolten Wong. Urias then battled back from an 0-2 count to drop the game-winner into shallow right-center, scoring Davis. Brent Suter (2-3) pitched the final two scoreless innings for the victory.

Colorado went ahead 5-3 in the top half of the 10th on an RBI single by Charlie Blackmon and a sacrifice fly by Brendan Rodgers.

Cody Bellinger hit a go-ahead grand slam in the eighth inning and Los Angeles pulled out a victory over visiting San Francisco.

Mookie Betts and Freddie Freeman each had two hits as the Dodgers extended their winning streak to six games with 13 victories in their last 14 contests and 17 in their last 19. The Dodgers also improved to 4-0 at home against the rival Giants this season.

Yermin Mercedes drove in a run for the Giants.

Vimael Machin and Stephen Vogt chipped in with RBI hits and A.J. Puk escaped a bases-loaded jam in the ninth for his first career save, helping the A’s win a second straight game for just the eighth time this season.

Marcus Semien and Nathaniel Lowe had two hits each and Leody Taveras scored twice for the Rangers, who had opened the second half with an 8-0 win at Miami — 3,000 miles away — on Thursday.

The inning started when Dansby Swanson ended Ohtani’s streak of retiring 15 straight batters with a leadoff walk. Olson followed with his 18th homer high into the right-field stands that broke the scoreless tie. Arcia ended Ohtani’s night when he added a three-run shot, his fifth.

Ohtani (9-5) was cruising until the seventh and looked visibly stunned at Olson’s towering home run. He pitched 6 1/3 innings and allowed six runs — matching his season high — on six hits, one walk and 11 strikeouts. It was his fifth straight game with 10-plus strikeouts. He had not allowed a home run since June 2.

Tyler Naquin drove in four runs and Donovan Solano homered and added three more RBIs to power Cincinnati to a win over visiting St. Louis in the opener of a three-game series.

Joey Votto and Jonathan India added solo homers for the Reds, who had the win tempered by the loss of their starting catcher Tyler Stephenson to a broken right collarbone just three batters into the game.

After striking out the first two batters to start the game, Graham Ashcraft and the Reds ran into bad luck when the third batter, Paul Goldschmidt, fouled a pitch off Stephenson’s right shoulder. Moments later, Goldschmidt hit a dribbler in front of the plate and Stephenson fielded the ball but fell to the turf in pain, unable to make a throw to first for the final out.

Joey Wendle hit an RBI double and an RBI single, and Avisail Garcia homered to help visiting Miami snap a four-game losing streak with a win over Pittsburgh.

Jason Delay homered for the Pirates, who have lost five of six. Pittsburgh starter Zach Thompson (3-7) gave up seven runs and nine hits in 5 1/3 innings, with two walks and two strikeouts.

Andres Gimenez hit a two-run home run in a four-run first inning and visiting Cleveland went on to the victory over Chicago.

Steven Kwan had three hits and Josh Naylor drove in three runs as the Guardians increased their winning streak to four games. Cleveland has won seven of the 10 games against Chicago this season.

Tim Anderson had a pair of hits and a run as the White Sox failed to resume their pre-break run of success. Chicago won five of its last six games before the All-Star Game, including two consecutive against the Guardians to close a four-game series last week.

Gallen (5-2) gave up just a pair of singles and no-hit the Nationals for 5 2/3 innings before Cesar Hernandez beat out a comebacker that deflected off Gallen’s glove. Marte also tripled, had four RBIs and scored twice. Carson Kelly and Varsho each finished with three hits.

Juan Soto had a line single leading off the seventh to extend his on-base streak to a major-league-best 27 games, and Hernandez also had a double to finish with two hits. Patrick Corbin (4-13) suffered his major-league-leading 13th loss, allowing five runs on eight hits over five innings. He walked one and struck out seven.