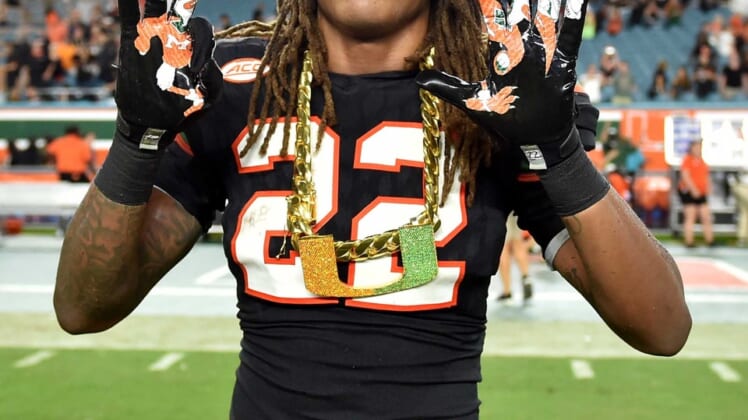 As the Miami Hurricanes kept winning this season, the popularity of the “Turnover Chain” continued to grow. And the Cuban link will be a part of 2018, too.

According to Barry Jackson of the Miami Herald, defensive coordinator Manny Diaz said the prop is coming back next year but may return in a different version.

On one hand, the prop is Miami. Everything about it — flashy, gaudy, designed by the “King of Bling” — is so perfectly Miami.

The Hurricanes were expected to field an elite defense, and the unit backed up the billing. But the chain also served as a motivator to create turnovers, and Miami entered bowl season with the second-most takeaways in all of college football.

Aided by an inefficient yet explosive offense, the ‘Canes and their chain earned a place in the ACC Championship Game for the first time in program history. The chain attracted headlines as Miami climbed to No. 2 in the nation, especially when The U forced four turnovers in romps of ranked Virginia Tech and Notre Dame teams.

Though a reasonable debate is whether the chain has run its course nationally, the only meaningful question is if the Cuban link continues to motivate the Miami defense. Pending potential NFL draft declarations, many of the same players can return in 2018.

So long as the prop fuels Diaz’s aggressive unit, the Turnover Chain has a place on the Hurricanes’ sideline.