Check out the latest Marvin Lewis rumors, as the former Bengals head coach garners interest for NFL coaching vacancies in 2021. 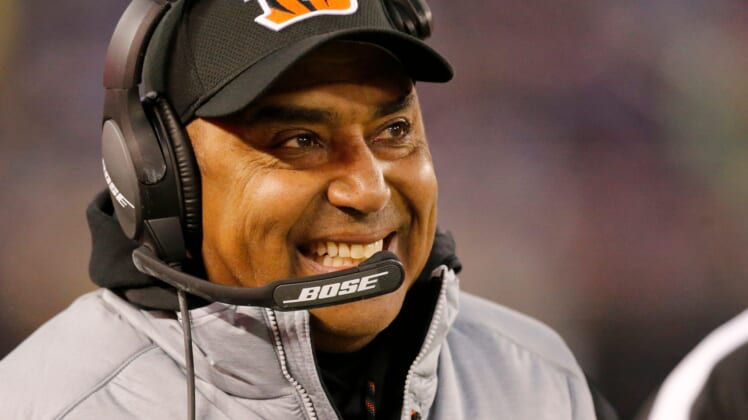 Longtime Cincinnati Bengals coach Marvin Lewis is being rumored as a prime candidate to fill one of the NFL’s head coaching vacancies in 2021.

Currently a co-defensive coordinator for Arizona State at the collegiate level, the buzz is that Lewis may well return to the professional ranks soon.

According to NFL Network insider Daniel Jeremiah, the possibility of Lewis resurfacing in the NFL is very real:

Lewis is best known for his tenure with the Bengals, which lasted from 2003 through the 2018 season. In that span, he posted a 131-122-3 record with seven playoff appearances, although he notably failed to win a postseason game.

Based on Jeremiah’s reporting, it seems as though the rest of the league recognizes the commendable job Lewis did in Cincinnati under the circumstances.

Marvin Lewis rumors: Why he’s a viable head coach in 2021

Despite being out of the NFL for almost two full seasons now, don’t get it twisted: Lewis is a legit head coach candidate. Bengals quarterback Carson Palmer played under Lewis and claimed the organization wasn’t committed to winning while he was there.

Since Lewis’ departure, his successor Zac Taylor has done little to inspire confidence, and after the front office and coach/play-caller failed to protect No. 1 overall pick Joe Burrow well enough this in 2020, Taylor may be on the way out after his second year on the job.

It appeared as if Lewis might take a step back from the gridiron when he was in a special advisor role for Arizona State last year. He apparently still had the itch to coach, however. The 62-year-old joined Herm Edwards’ 2020 staff with the Sun Devils, albeit for only two games to date due to the shortened season.

Beyond what he’s done of late, Lewis has over a decade of experience at the NFL level in addition to what he did with the Bengals. He began with the Pittsburgh Steelers as a linebackers coach in 1992, and later served as defensive coordinator for the Super Bowl XXXV champion Baltimore Ravens.

Lewis’ old-school, no-nonsense approach to the game commands respect, as does a winning record from his lengthy stint in Cincinnati. If teams with head coaching vacancies want an experienced candidate as opposed to a young upstart or the latest buzz-worthy coordinator, they’d be hard-pressed to do better than Lewis on that front.