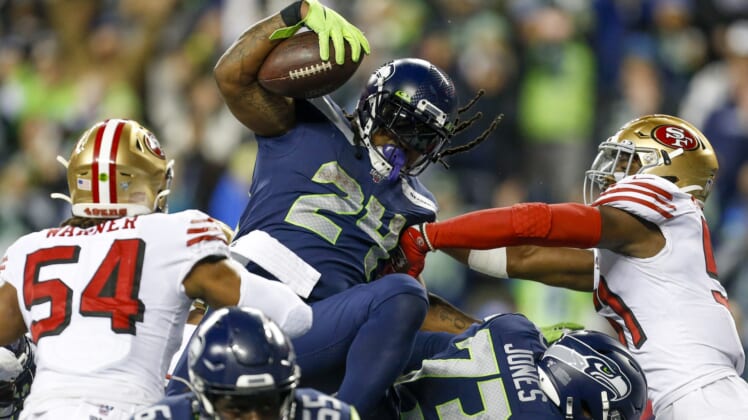 As good as Russell Wilson is under center, Seattle’s offense still needs a strong rushing attack to balance things out, thanks to a mediocre offensive line that is desperately missing starting left tackle Duane Brown (out with a knee injury).

Heading into their wild-card matchup against the Philadelphia Eagles this weekend, the Seahawks are banged up all over but may have what it takes with Lynch and Homer to continue pounding out wins.

In their regular-season loss to the NFC-best San Francisco 49ers, Homer and Lynch complemented one another very nicely. Lynch was the battering ram, while Homer utilized his fresh legs and quickness to make big plays in space.

If Lynch can continue to get into the flow and starts to look like the Beast Mode of old, then Seattle’s offense will once again have a chance to grind opposing defenses into submission. He showed sparks of his old self on Sunday night.

With Homer looking like a natural third-down option, the Seahawks can go about their business like they have all year without a lot of changes to their approach.

This is still very much a flawed team that needs help on defense. But with Wilson slinging it around, coupled with a still-strong rushing attack, the Seahawks have a very good chance to beat the Eagles this weekend and see what happens down the road.