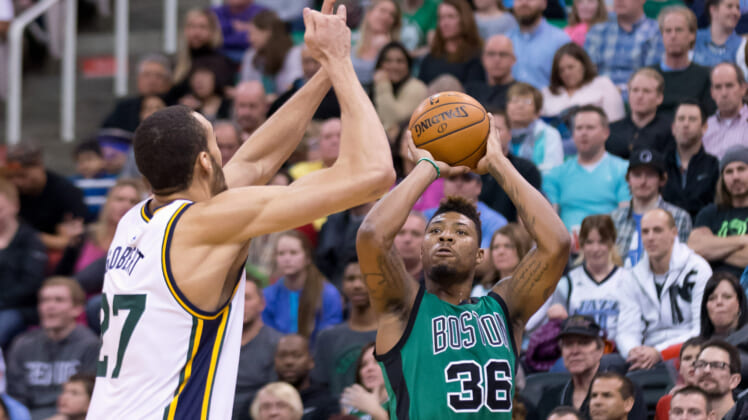 Rudy Gobert has won three Defensive Player of the Year awards, coming in 2018, 2019 and 2021. Could he win another one at the end of this season? That depends on who you ask. Boston Celtics guard Marcus Smart is one who defiantly believes Gobert isn’t the best defensive player in the league, and many others agree.

With Smart also under consideration for the prestigious award, it makes sense that he’d care more than others, he has some extra skin in the game, wanting to win it for himself. Is Smart justified in his belief that Gobert doesn’t deserve to win the trophy for a fourth time? First, we have to dive into what was said by Smart.

For the record, if Gobert wins the DPOY a fourth time, he will then be tied with Ben Wallace and Dikembe Mutombo for the most in NBA history.

“I’m not taking anything from the bigs,” Smart told ESPN. “A vital part of the game is protecting the paint. But, as guards, we do a lot more before [our man] gets to the paint. … Contesting the 3, contesting pullups, making sure he doesn’t get to his spots.”

Indeed he has. Honestly, Smart makes a very good case, pointing out the cold, hard truth. Gobert doesn’t guard the perimeter, whereas Smart isn’t shy to mix it up in the paint, when he has to. If a player is versatile, while still being effective, isn’t that more valuable than playing one position, being pigeonholed into having just one role? That’s what the voters will have to decide, but Smart’s comments should at least give them something to think about.

Making the case for Smart to win DPOY

Let’s lay out some quick facts. The Boston Celtics lead the NBA in points allowed per game (104.2), which means they’re the No. 1 defending team in basketball. Marcus Smart is their best defender, taking on the best opposing player on a nightly basis.

Smart ranks sixth in steals per game (1.7), 11th in defensive win shares, 14th in defensive box plus/minus, and 18th in defensive rating. All respectable numbers, but are they enough to stand out above the Stifle Tower?

Even though Smart’s defensive prowess is obvious, a non-big man has only won the award a total of three times in the past 25 years. With Gobert having the momentum, based off winning the award three times already and not dropping off his play this year with the Jazz, overtaking him as the new DPOY will be an incredibly difficult task.

Among other top competitors Smart is believed to be contending with is Miami’s Bam Adebayo, Memphis’ Jaren Jackson Jr., Phoenix’s Mikal Bridges. All players have played ferocious defense all season, but who will emerge as the winner? For now Smart appears to be the frontrunner based off the most recent betting odds.