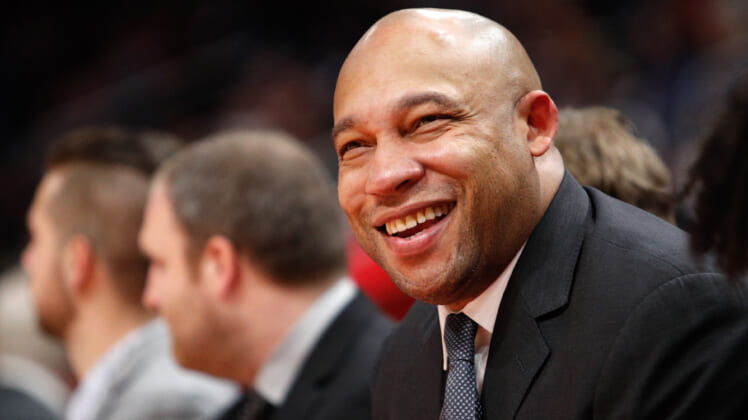 One large piece of the puzzle has been put in place. Former Milwaukee Bucks assistant Darvin Ham has just agreed to become head coach of the Los Angeles Lakers according to Adrian Wojnarowski of ESPN.

As the Lakers head into an offseason searching for a way to improve upon their less-than-desirable results from the 2021-22 season, hiring Ham on a four-year contract starts them off on the right path.

What does Darvin Ham bring to the Lakers?

Hiring Darvin Ham brings him back to Los Angeles, where he worked as an assistant with the team from 2011 to 2013, before leaving for the same role with the Atlanta Hawks from 2013 to 2018. He’s been with the Bucks ever since.

While it’s true Ham has never run the show as an NBA head coach before, he was the leader of the New Mexico Thunderbirds out of the G-League from 2010 to 2011. He otherwise brings plenty of experience and has won the NBA Finals both as a player with the Detroit Pistons in 2004 and as a coach with the Bucks in 2021.

Ham worked with the likes of Kobe Bryant, Pau Gasol, and Dwight Howard in his previous stint in L.A., now he’ll get a chance to coach LeBron James, Anthony Davis, and maybe even Russell Westbrook, among several others.

Other finalists for the gig were believed to be Kenny Atkinson and Terry Stotts. Instead Ham will get his first chance to be an NBA head coach, and being that it’s with the Lakers, it’s a bigger opportunity than most first-time head coaches get. We’ll see how he handles it from here. But first, the Lakers have some roster changes to consider.

Related: Los Angeles Lakers legend trashes today’s NBA players: ‘All they do is practice threes, get tattoos, and tweet’