Check back here for the latest Los Angeles Chargers rumors, as the franchise tries to mold a consistent contender around dynamic quarterback Justin Herbert. 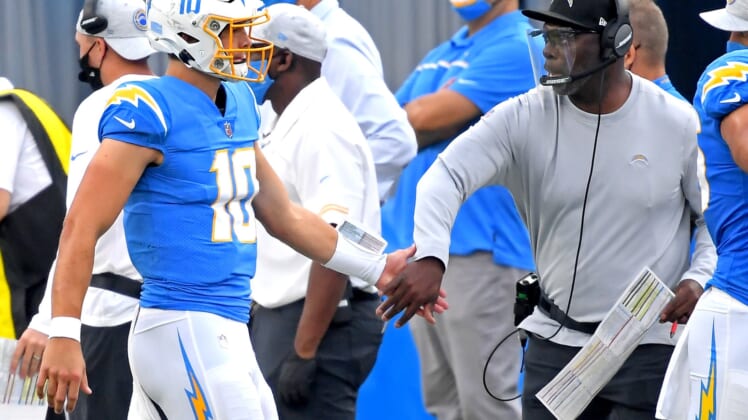 The Los Angeles Chargers have one of the NFL’s most talented rosters and brightest young star quarterbacks in Justin Herbert, yet they’re in the midst of an underachieving season under head coach Anthony Lynn.

Does that mean Lynn is on the way out after the 2020 season? According to the latest rumors emerging from the City of Angels, the front office isn’t shutting down the possibility that Lynn could return in 2021.

Despite the Bolts being eliminated from AFC playoff contention three quarters into the year, according to an ESPN.com report by insiders Jeremy Fowler and Dan Graziano, Los Angeles won’t be making any rash decision to let Lynn go.

“There was league-wide skepticism about Lynn’s status well before all this, and that’s only strengthened now,” the article says. “The Chargers like Lynn a great deal and aren’t exactly eager to move on.”

The “all this” referred to is cited in the article as Lynn’s inability to win close games. With the exception of the last two defeats at the hands of Buffalo and New England, the Chargers’ preceding seven losses in 2020 were all by eight points or fewer. That 45-0 blowout against the Patriots was really ugly. It underscored the chasm between someone like Bill Belichick and a non-elite coach like Lynn.

Such a lopsided outcome, combined with a 5-11 record during the 2019 campaign and 41-28 loss to the Pats during the AFC Divisional Round the year before that was worse than the score indicated, casts Lynn in an unfavorable light. On top of all that, Lynn was steadfast in his determination to start Tyrod Taylor at the beginning of this season, only to see Herbert prove to be the far superior talent who has given Los Angeles a chance to win almost every week.

Imagining what Daboll could do with someone like Herbert — a similarly sized, skilled athlete as Allen but a more accurate passer — has to be tantalizing to the entire organization, not to mention casual NFL fans who appreciate quality quarterback play.

Herbert’s presence would make a potential head coaching vacancy in Los Angeles among the most attractive on the market. Telesco has done a fine job assembling this roster, with a nice mix of veterans like wideout Keenan Allen and young players like edge-rusher Joey Bosa to build around. Considering he’s done that and hit a home run in the 2020 draft with Herbert, the fanbase should trust Telesco to get the head coach right.

Other than Daboll, though, there are alternative QB-friendly hires who could come aboard. Arthur Smith of the Titans revived Ryan Tannehill’s career in Tennessee. Joe Brady spent time on Sean Payton’s Saints staff, won a national championship with Joe Burrow at LSU for the 2019 season, and is now the play-caller for Teddy Bridgewater and the Carolina Panthers. Brady is another bright offensive mind L.A. may consider.

Having been in the Indianapolis Colts‘ front office for prior to getting his GM gig, maybe Telesco turns back to that pool for a hire on the other side of the ball. Defensive coordinator Matt Eberflus is deserving of head coach hype after multiple seasons of success working with Frank Reich.

Whichever way the Chargers go in retaining or firing Lynn, Herbert gives the franchise and its fans plenty of reason for optimism in 2021 and beyond regardless of who the coach is.