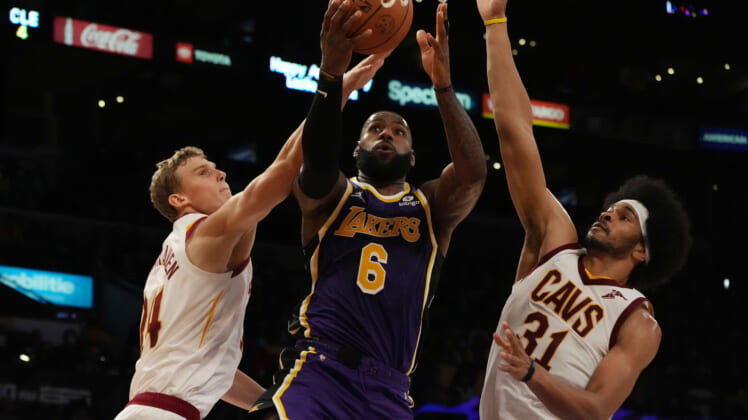 While LeBron James has won an NBA championship with three different teams, the Ohio native will always be remembered most for his days with the Cleveland Cavaliers. As his storied career enters the final stretch, a return to Cleveland is possible.

It’s already happened once before. Drafted by his hometown team No. 1 overall in the 2003 NBA Draft, James starred for the franchise from 2003-’10. Following a four-year stint with the Miami Heat (2010-’14), he returned home and brought the city a championship.

Forever immortalized in Ohio, James is now approaching the latter stages of his contract with the Los Angeles Lakers. Set to become a free agent after the 2022-’23 season, LeBron shared before the All-Star Game that he is open to rejoining the Cavaliers.

During an in-depth interview with Jason Lloyd of The Athletic, James acknowledged that returning to Cleveland after the 2022-’23 NBA season is possible.

“The door’s not closed on that. I’m not saying I’m coming back and playing, I don’t know. I don’t know what my future holds. I don’t even know when I’m free.”

LeBron James on the possibility of returning to Cleveland Cavaliers, via The Athletic

LeBron admitted that it’s not something he is thinking about right now. He’s still under contract with the Lakers through next season and wants to win a fifth NBA championship. However, the 37-year-old is fully aware that the Lakers are in decline and there will be better opportunities elsewhere to close out his Hall of Fame career.

From Cleveland’s perspective, the Cavaliers would have a lot to offer. Evan Mobley is quickly emerging as an NBA star and teammates Jarrett Allen and Darius Garland earned All-Star Game selections this season. If LeBron is willing to take a pay cut, which he is open to under the right circumstances, this could be the perfect pairing.

He’ll keep riding things out in Los Angeles for now. While it won’t attract as much fanfare as the past two times LeBron hit the open market, many NBA fans will be excited to see who lands him once he becomes a free agent.