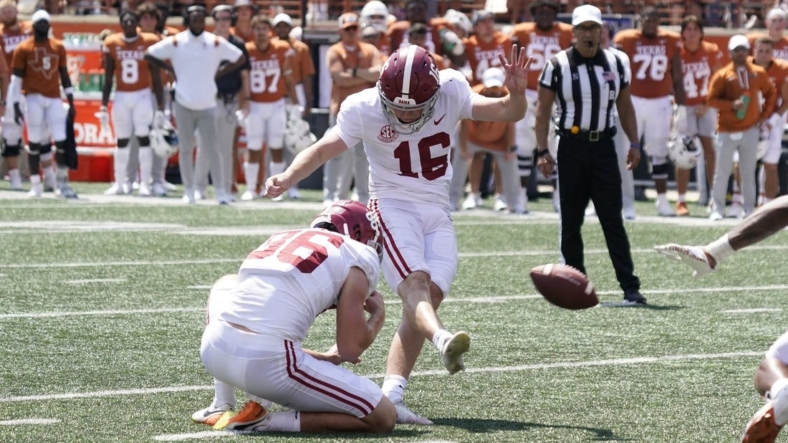 Will Reichard kicked a 33-yard field goal with 10 seconds left as top-ranked Alabama notched a 20-19 victory over Texas on Saturday afternoon in Austin, Texas.

Bryce Young passed for 136 of his 213 yards in the fourth quarter while driving the Crimson Tide (2-0) to 10 points. He threw a 7-yard touchdown pass to Jahmyr Gibbs with 8:29 remaining to give Alabama a 17-16 before guiding the winning field-goal drive.

Jase McClellan rushed for 97 yards, including an 81-yard touchdown run, on six carries as the Crimson Tide improved to 2-7-1 all-time versus Texas.

Bijan Robinson added a touchdown for Texas, which gave the Crimson Tide a fierce battle despite losing quarterback Quinn Ewers late in the first quarter with an apparent left shoulder injury.

Ewers, an Ohio State transfer, was off to a stellar start by completing 9 of 12 passes for 134 yards in his second career start. He was hurt late in the first quarter after taking a late hit from Alabama’s Dallas Turner.

Ewers returned to the field out of uniform in the third quarter and sported a sling.

Hudson Card replaced Ewers and completed 14 of 22 passes for 158 yards, despite limping for most of the second half.

Auburn tacked on a 24-yarder to make it a six-point margin with 12:55 left in the game.

The score was tied at 10 at halftime after Texas botched a field goal on the final play. After an off-the-mark snap by Zach Edwards, Auburn’s 20-yard field goal was way wide to the left.

On the next play from scrimmage, McClellan broke loose on his touchdown run to give the Crimson Tide a 10-3 lead.

Ewers drove the Longhorns deep into Alabama territory late in the first quarter. He threw a pass under pressure out of the end zone but Turner’s hit drove his left shoulder into the turf.

Card entered and Texas tied the game at 10 two plays later when Robinson scored on a 1-yard run around left end on the opening play of the second quarter.