In the NFL, one player’s recovery away from the field is another player’s time to shine.

The Las Vegas Raiders went into the offseason with one question mark at cornerback, but Trayvon Mullen Jr.’s shaky outlook for training camp adds more uncertainty on the back end of the defense.

In May, Mullen underwent surgery on his foot following an injury-riddled 2021 campaign with just five appearances. He went to Twitter to quell any concerns about the procedure on May 3:

Before the Raiders veterans reported to camp Wednesday, the team placed Mullen along with defensive linemen Bilal Nichols and Johnathan Hankins on the physically unable to perform list. The latter two have unspecified injuries.

The Athletic’s Vic Tafur noted that the club seems most concerned with Mullen among the trio on the PUP list.

“The status of Mullen, who had offseason surgery on his foot, is more up in the air,” Tafur wrote. “Among the players in this group, his status is the most concerning. Whether most or all of them can return before the season opener will be something to monitor.”

Don’t ring the alarm bells yet. Perhaps the team would prefer to take it slow with a player who just had surgery two months ago. Though the Raiders will have a new defensive system under incoming play-caller Patrick Graham, Mullen should have a starting job once he’s back on the field.

Mullen led the Raiders in pass breakups for the 2019 and 2020 campaigns. When healthy, he’s earned the benefit of the doubt, and the defense needs him at or close to 100 percent to shore up pass coverage on the boundary.

With Mullen on the mend, the cornerback room has a few players who can take advantage of increased reps.

Rock Ya-Sin may have needed a fresh start after he shifted between starting and backup roles with the Indianapolis Colts last year. He still played 70 percent of the defensive snaps and allowed a 53.3 percent completion rate though.

In Vegas, Ya-Sin must continue to limit penalties and cover receivers with his feet, not his hands. With better technique, he’ll be able to find the ball, force more turnovers and break up a high number of passes.

“One of the main things that we are probably going to work on the most is hand placement,” Rowe said. Sometimes he gets his hands a little high on wide receivers, causing them to tug a couple times. That’s something we can correct. And then just getting used to playing the ball better.”

In Indianapolis, Ya-Sin took some steps forward but had inconsistencies that cost him against quality receivers. Fortunately for him, he’s made correctable mistakes that the Raiders’ coaching staff can work on this summer.

Vegas acquired Ya-Sin in exchange for its 2021 sack leader in Yannick Ngakoue, which suggests the team may have high expectations for him. He’s the front-runner to replace Casey Hayward on the boundary, but the Temple product will face stiff competition for the starting spot if Mullen returns on the opposite side.

Coming off his best season, Anthony Averett still flew under the radar. He signed a one-year, $4 million deal and didn’t generate a buzz comparable to the excitement around Ya-Sin, who’s a second-rounder from the 2019 draft.

Former Baltimore Ravens defensive coordinator Don Martindale saw an All-Pro talent in Averett before the 5’11”, 185-pound cornerback had to replace an injured Marcus Peters in the starting lineup last season.

Averett didn’t earn any special accolades for his 2021 performance, though he showed the ability to compete against starting wide receivers on the boundary, leading the Ravens in interceptions (three) with 11 pass breakups.

In Baltimore, Averett just needed an opportunity to play an expanded role. With one full year to showcase himself, he performed at a starting-caliber level.

If Mullen has an extended stay on the PUP list, Graham may employ Ya-Sin and Averett on the boundary. They’re two cornerbacks in a contract term who can make big money on the 2023 free-agent market with a productive 2022 season. 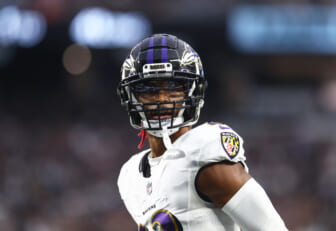 Also Read:
Why Anthony Averett is an X-factor in the Las Vegas Raiders secondary

Amik Robertson hanging on to a roster spot?

Go ahead and laugh. You may not give Amik Robertson a chance to sniff the field in the upcoming campaign after he struggled last season, but the new coaching staff is at least willing to take a look at him on the practice field.

In the spring, Tafur noted the coaching staff took note of Robertson’s versatility. According to Tafur’s colleague at The Athletic, Tashan Reed, the third-year pro took a lot of reps on the outside through mandatory minicamp.

Because of Mullen’s injury, the Raiders may want to carry insurance for the boundary of their secondary. At Louisiana Tech, Robertson lined up primarily on the perimeter and had a highly productive collegiate career, logging 14 interceptions and 34 pass breakups.

Last year, opposing quarterbacks targeted Robertson on the outside. He gave up three touchdowns and allowed a 135.4 passer rating in coverage while on the field for just 20 percent of the defensive snaps.

Robertson cannot do anything about his size (5’8”, 187 lbs), but he could improve his footwork to stay on the hip of receivers and avoid taking the bait on double moves.

As an undersized boundary defender, Robertson isn’t an ideal matchup against bigger wideouts, but the Raiders can strategically plug him into situations if he rediscovers a knack for getting his hands on the football.

On one hand, Mullen’s absence comes with some concerns. That being said, the Raiders have a young cornerback room with players who have a lot to prove while in a competition to hold a roster spot or take their careers to another level. Someone from that unit may exceed expectations in 2022.