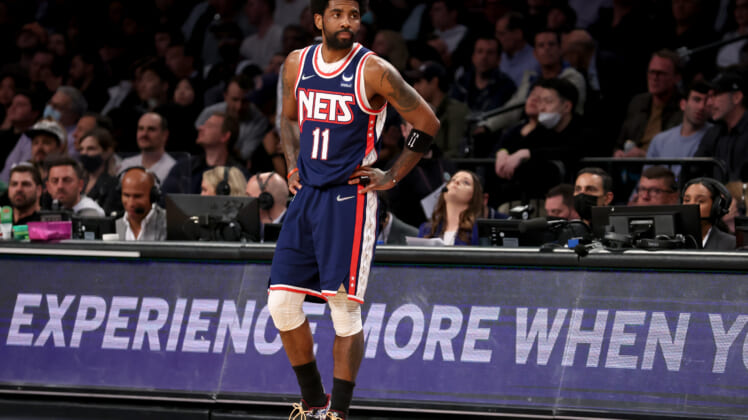 Following the team’s surprising first-round sweep to the Boston Celtics, Kyrie Irving admitted that his season-long COVID vaccine saga hampered the Brooklyn Nets’ success in 2022 and was a part of what led to their eventual first-round NBA playoffs exit.

The story of Irving’s decision to not be vaccinated for COVID-19, despite New York City’s requirements, followed the team around for the entire 2021-2022 season. Entering the year, the Nets were a favorite to win the NBA’s Eastern Conference and seriously contend for a championship. However, the superstar point guard’s strong stance against vaccination led to him missing all of the team’s home games until the last few weeks of the season when vaccine mandates were lifted.

After the team’s 116-112 defeat in Game 4 of their first-round series against the Boston Celtics, Irving spoke candidly about the team’s trials and tribulations this season. Which also included James Harden’s apparent unhappiness and eventual trade for another disgruntled player in Ben Simmons. The Nets’ loss on Monday ended their season in a shocking four-game sweep, and the 30-year-old admitted his situation ended up being a detrimental distraction for much of the season.

“I think it was just really heavy emotionally this season,” Kyrie Irving said [ht/t ESPN]. “We all felt it. I felt like I was letting the team down at a point where I wasn’t able to play. We were trying to exercise every option for me to play, but I never wanted it to just be about me. And I think it became a distraction at times. And as you see we just had some drastic changes.”

In his own post-game press conference, head coach Steve Nash also admitted that the Kyrie Irving vaccine situation — among other issues — led to the “lack of continuity” in the team’s NBA playoffs defeat to the Celtics.

“I think that’s a big reason why we were in that position, a lack of continuity,” Steve Nash said. “Kevin [Durant] having to carry such a heavy burden to keep us in the playoff picture. All those things off the floor play a role in what happens on the floor as well. They’re tied, and there’s no question that it has an impact. Over the course of the season, there were just too many, too many things that held us back for moments and pockets.”

Ben Simmons’ inability to play following his trade to the team, including in the playoffs, was just one of several problems that a very expensive and expectations-filled Brooklyn Nets squad had during an extremely disappointing 2021-2022 season.