Captain Kirk lost in space: Cousins and the ‘Skins in deep trouble 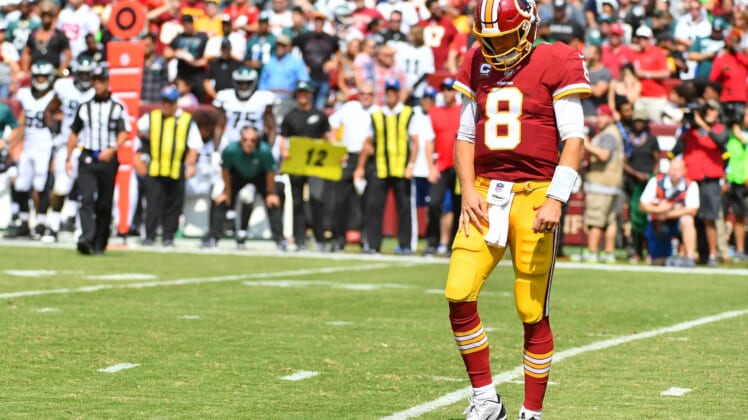 We’re looking all over the place for a franchise quarterback known for his accuracy and poise, but he is nowhere to be found. Kirk Cousins entered the 2017 season without last year’s offensive coordinator (Sean McVay). He also is without last year’s top two receivers (DeSean Jackson and Pierre Garcon).

Through three preseason games and his first regular-season game, Cousins has failed in all but one area: Justifying Washington’s reluctance to give him a big-time contract.

Here are the raw numbers.

None of that’s any good. Cousins also lost two fumbles Sunday against the Philadelphia Eagles. Throw in the fact that Washington’s running game is disgustingly inept — 34 yards on 13 carries by guys not named Cousins in Week 1 — and not good doesn’t begin to describe the offense.

Let’s take a look at just how not good Cousins has been, shall we?

It started with his first attempt of the game. Cousins launched the ball deep down the middle, attempting to hit Terrelle Pryor. He overshot him by quite a bit.

Two throws later, without any pressure in his face whatsoever, Cousins did this.

Overthrows were prevalent. He displayed shoddy footwork and threw off his back foot many times.

Did these two just not develop chemistry in preseason or something? pic.twitter.com/JZ4flI1VYW

Just getting guys laid out pic.twitter.com/sjD4SOcJWM

He completed just 23-of-40 passes for 240 yards in Week 1. Many of the receptions that did get hauled in were due to receivers making plays on balls that were not accurately thrown. Obviously, it’s going to take time for Cousins to gain chemistry with his new receiving corps. But it’s not like the guys haven’t had all spring and summer to make some headway on this front.

There is still time for Captain Kirk to turn his ship around from wherever it is currently. Week 1 is no time to go into sheer panic mode. But the early returns on the 2017 version of Kirk Cousins and the Washington offense are awful.