Kings aim to tighten up defense before facing Oilers 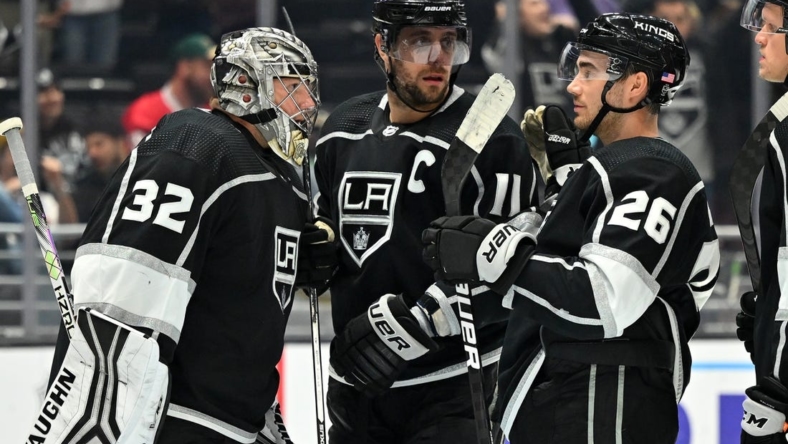 The Los Angeles Kings are coming off one of their worst defensive efforts of the season and they won’t catch a break when they visit the Edmonton Oilers on Wednesday night.

The Kings lost to the Calgary Flames 6-5 on Monday night to kick off a four-game road trip. Next they head to Edmonton, where Connor McDavid and Leon Draisaitl are awaiting with long point streaks.

McDavid has at least a point in 10 straight games (10 goals, 12 assists), while Draisaitl is riding an 11-game point streak (seven goals, 13 assists).

Los Angeles forward Phillip Danault said the Kings need to get off to a better start against the Oilers. The Flames scored four goals on their first eight shots to surge to a 4-2 lead after the first period. The Kings closed the gap with two late goals, but it was too little, too late.

“Defensively we have to be better, move the puck quicker, we have to get open,” Danault said. “We put this game behind us and we’ll keep that third period in mind.”

The Oilers are back home following a four-game East Coast road trip in which they went 2-2. Edmonton hosts the Vegas Golden Knights on Saturday before heading back East for three more games.

Edmonton is coming off a solid all-around performance in a 4-2 win against the Florida Panthers on Saturday.

“We played in a way which I think is conducive to win games in the National Hockey League,” Edmonton coach Jay Woodcroft said. “Now, we have to bring that mindset with us when we get back home in front of the best fans in the world.”

The Oilers returned home without the services of left wing Evander Kane, who sustained a deep gash to his wrist in a 3-2 win at the Tampa Bay Lightning on Nov. 8.

Kane, an integral part of Edmonton’s run to the Western Conference Finals last season, is expected to be out 3-4 months.

Among those who might be counted on to step into Kane’s role is Devin Shore, but he has yet to score a goal in 14 games with the Oilers this season.

Dylan Holloway, the 14th overall pick by the Oilers in the 2020 NHL Draft, should also get more playing time in Kane’s absence, but he played just 6:55 against the Panthers on Saturday and is also looking for his first NHL goal after six games.

Klim Kostin, a former first-round pick of the St. Louis Blues in 2017, made his Edmonton debut against Florida and could also be in line for more playing time.

Meanwhile, the Kings will be looking to build on some of the positives that occurred in the loss to the Flames.

Arthur Kaliyev scored two goals, including his team-leading fourth power-play goal. Kevin Fiala also had a goal and an assist for his fifth multi-point game of the season.

“Just because we fought back and made it 6-5, there are a lot of things that we have to fix,” McLellan said.