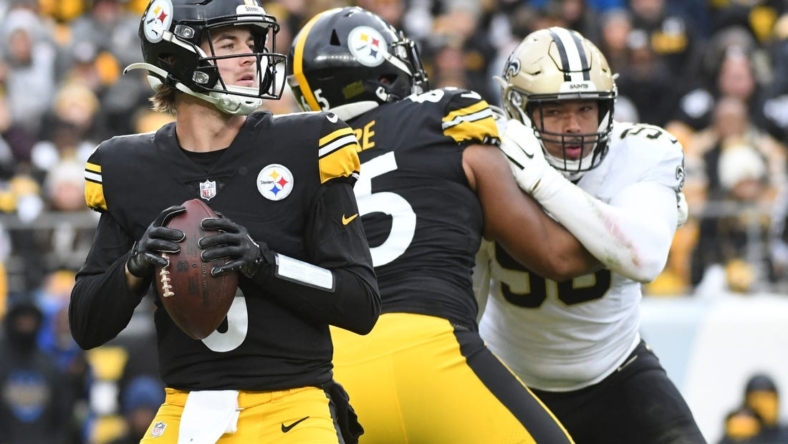 Rookies Kenny Pickett and George Pickens each ran for a touchdown, and the host Pittsburgh Steelers rode their defense to a 20-10 victory over the New Orleans Saints on Sunday.

Pickett completed 18 of 30 passes for 199 yards for the Steelers, whose two rushing touchdowns were all the scoring the team needed. Pittsburgh totaled 217 yards on the ground and shut out New Orleans in the second half.

The Steelers (3-6), rejuvenated by the return of linebacker T.J. Watt and safety Damontae Kazee from injured reserve, held the Saints to 186 yards for their first victory since Oct. 16.

Andy Dalton completed 17 of 27 passes for 174 yards with one touchdown and two interceptions for New Orleans (3-7).

The Steelers drove to the 10-yard line before a sack halted the drive to start the third quarter. Matthew Wright, signed from Kansas City’s practice roster this week to replace injured Chris Boswell, missed a 39-yard field-goal attempt.

That was the only scoring opportunity in the third quarter as the teams carried a 10-10 halftime tie into the fourth quarter.

Pittsburgh reached the New Orleans 12 before Pickett was sacked. Wright kicked a 33-yard field goal to give the Steelers a 13-10 lead with 13:43 remaining.

Kazee, who hadn’t played since the preseason, intercepted Dalton and Pittsburgh took over at the Saints’ 44. That led to Pickett’s 1-yard touchdown run and a 20-10 lead with 8:38 left.

Pickens scored from 1 yard out for a touchdown to give Pittsburgh a 7-0 lead with 5:06 left in the first quarter.

The Steelers increased the lead to 10-0 early in the second quarter when Wright made a 33-yard field goal.

After punting on their first three possessions, the Saints drove 40 yards to set up Wil Lutz’s 44-yard field goal, trimming the lead to 10-3.

Dalton threw a 15-yard touchdown pass to Juwan Johnson with 19 seconds left in the quarter, producing the 10-all halftime tie.