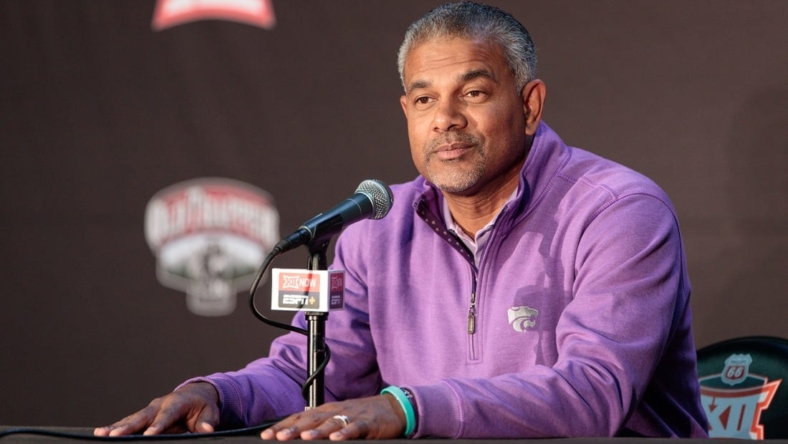 Markquis Nowell and Nae’Qwan Tomlin each scored 14 points as the Jerome Tang era got off to a flashy start with a 93-59 Kansas State victory over the visiting Texas-Rio Grande Valley in the season opener.

K-State, which had a season-most 84 points in a game last season, reached that mark with 5:58 left in the second half.

The Wildcats were well-balanced with six players reaching double figures. They held a 41-19 advantage in bench scoring.

K-State shot well from three-point range, especially in the first half. They had 25 assists on 30 made baskets. They also forced 26 UTRGV turnovers.

Besides Nowell and Tomlin, the Cats were led by Keyontae Johnson with 13 points, Abayomi Iyiola with 12 and Desi Sills and Ish Massoud with 10 each. Tomlin also led the Wildcats with eight rebounds.

Justin Johnson led Texas-Rio Grande Valley with 20 points. He was joined in double figures by Adante Holiman, who had 13 points.

The first half couldn’t have gone any better for the Wildcats. They used a 17-2 run to break open a close game early in the half. They shot well from the outside, going 9-for-16 from beyond the three-point line, from the line (9-for-10) and overall from the field (17-for-33).

The Wildcats, who led 52-26 at the half, were led by Johnson with 11 points. Sills added 10 points as eight different Wildcats scored in the first half.

Johnson led the Vaqueros with nine points. They shot just 29 percent from the field.