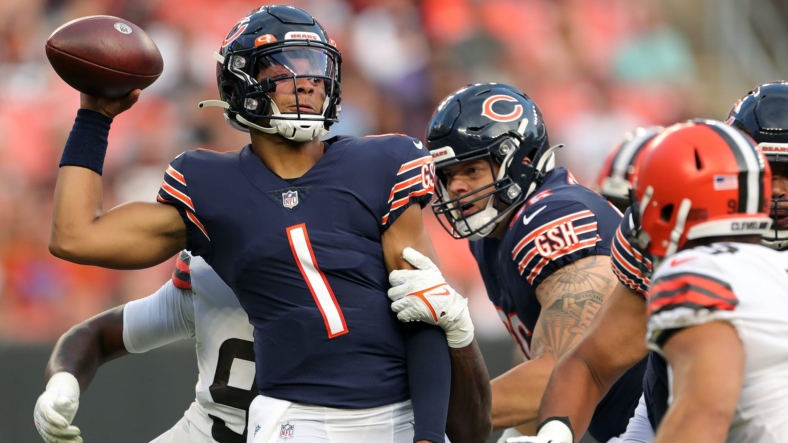 When this offseason came to an end, the Chicago Bears were getting blasted for not building a team around Justin Fields. Countless articles broke down how the Bears had failed Fields.

It’s hard to judge a full rebuild, especially in the first year of it with a new head coach and general manager taking the reins of your sophomore franchise QB. How do you gauge a team you’re told is at ground zero of a rebuild. The Bears were predicted to have a tough season full of losses with best case scenario being six or seven wins.

Even as reports were coming out about a possible six-win season being their ceiling and how they failed to put an offense around Fields. The young QB was hard at work getting a strong grasp of the new offense. Putting in the work to be ready to lead a team that most don’t think he is ready for. Word also started getting out that head coach Matt Eberflus was creating the scheme to fit his new quarterback’s skill-set. Yet, still more bad news was piled on top of the Bears as four of their top wide receivers would be ruled out of practice and preseason games while not knowing if they would return for the start of the season.

That’s when we started noticing the young quarterback’s leadership qualities as players who were fighting for roster spots weeks before were now looking like the starting receivers for the team . We also took note of another part of the team playing above what was expected. Last season Fields was sacked nine times, 4 1/2 by Miles Garrett , when they played the Browns. This time, the offensive line was holding up and protecting Justin Fields. That was supposed to be the weakest part of the team along with the now-decimated receivers group. Yet , they are playing like a well put together team and most important, the QB wasn’t sacked at all during his drives. Fields has once again shown every one that he is a leader, which all the greats you could name at quarterback have been.

Even last year in the terrible performance that they were having , Fields showed progress during the second half of the season and advanced stats show he is primed to make a giant leap in year two. That showed up Saturday against the Cleveland Browns. Justin Fields completed 14-of-16 passes for 156 yards with three touchdowns and zero interceptions.

He led touchdown drives of 80 yards, 52 yards, and 62 yards. This showing from Fields could be shrugged off as a fluke. But when you see constant upward progression, and every time the man plays he not only gets better but he makes the players around him progressively better. I’m seeing this season through different lens now.

In the post-game interview, coach Matt Eberflus was asked about his starting quarterback’s play during the where he answered, “he’s steadily getting better. He improved in the first game, then got a little better in the second game, and then he was better tonight. So he (Fields) is progressing and not only getting the mental but also working on his feet work.” The coach said he was pleased with his young quarterback’s progression with his game.

I believe we might be witnessing something special. Maybe not Super bowl contender or a deep playoff run this second year, but we definitely could see the Bears and Fields fighting for a wild card spot. Their next stop is the season opener against the San Francisco 49ers where a very strong defense will put the Bears and their new-found success to the test. I definitely can’t wait to watch as this storyline unfolds on the gridiron.