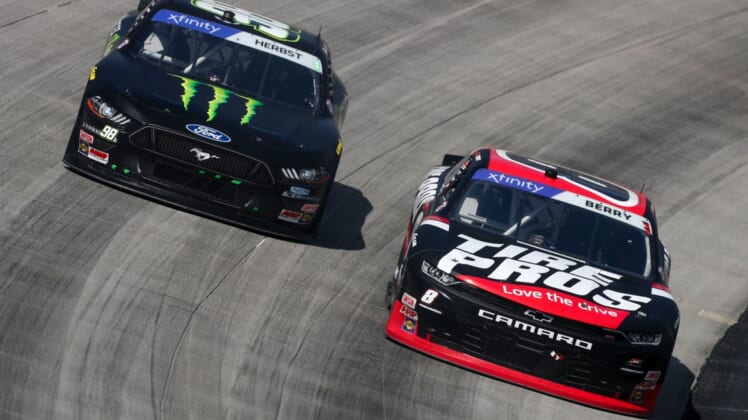 Berry led the final 55 laps of the 200-lap race to claim his first win of 2022 and the third of his Xfinity Series career.

His JR Motorsports team claimed four of the race’s top-five positions — the first time any team has done so since 2013. Joe Gibbs Racing’s Ty Gibbs was third followed by JRM drivers Noah Gragson and Sam Mayer.

Allgaier led a race-best 67 laps but was passed by Berry’s No. 8 JR Motorsports Chevrolet with just over a quarter of the race remaining. He rallied to his ultimate second-place finish after suffering a setback on a slow final pit stop. Berry returned to the track with the lead on that restart and Allgaier had to race forward from fourth place, getting as high as second but never having a true chance to make a pass for the win.

“I struggled a lot on the bottom on the restarts and just kept trying to work to get better. It’s just credit to these guys, the pit crew did a phenomenal job today, they executed when we needed it,” said Berry, the 31-year old Tennessee native. “And we were there when it counted.

“I went toe-to-toe with Justin Allgaier and he’s so freaking good here,” Berry added. “Gosh, I thought he was kind of out of it after that pit stop and then he was right back to second and I thought, ‘Here we go again.’ ”

The 35-year-old Allgaier, a perennial championship contender, is looking for his first win since Darlington, S.C. last May. This marked his fifth runner-up finish in that time, but is his best showing of 2022.

“Proud of our team, we wanted to get the car in victory lane but with the string of bad luck, I feel like today was a good day, just a little bit short,” said Allgaier, who had finished 20th or worse in four of the five races leading into Dover.

Gragson’s fourth-place finish marked a solid end to a challenging day for the 23-year-old and earned him his $100,000 bonus check in the Dash 4 Cash program.

“What a day for the entire company, four cars in the top-five, and congratulations to Josh Berry for his win,” said Gragson, who added with a smile holding up the giant $100,000 cardboard Dash 4 Cash winner’s check, “my car was as fast as the Xfinity Internet.”

A.J. Allmendinger finished sixth but retains the championship lead by 43 points over both two-race winner Gragson and three-race winner Gibbs.

Mayer’s fifth-place finish was impressive considering his eventful day. He won Stage 1 and then had a pit-stop situation during the ensuing stop. His No. 1 JR Motorsports Chevrolet lost a left rear tire and he ended up having to make an extra stop and eventually dropping back as far as 19th place before making his way forward again.

Richard Childress Racing’s Sheldon Creed was eighth — the highest-finishing rookie with Riley Herbst and Ryan Sieg rounding out the top 10.