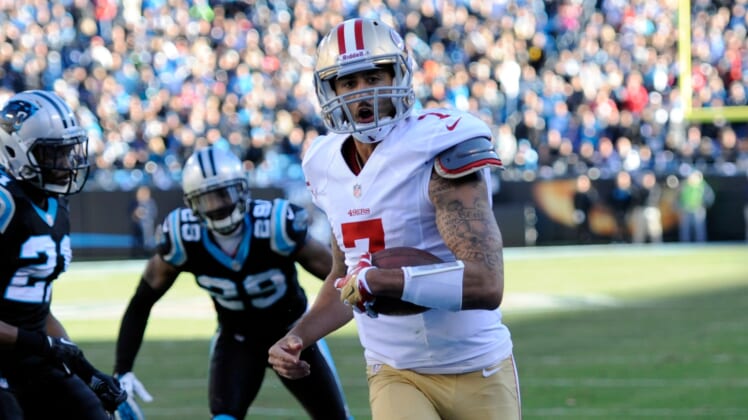 John Elway is a big fan of Colin Kaepernick.

The Denver Broncos and San Francisco 49ers held their final joint practice on Thursday, after which Elway addressed the media.

One of the questions shot at the Hall of Famer was what he thinks about quarterback Kaepernick (via the team’s official website):

“I’ve always liked Colin,” said Elway. ”I think he’s very athletic, and he’s a guy that can make a lot of big plays. He’s doing more within the pocket, which I think will continue to help him. He’s a great athlete, and he’s got that big-play ability to avoid things and make things happen.”

That’s quite the boatload of praise coming from the legendary quarterback, who boasts nine Pro Bowls and two Lombardi Trophies.

The high regards for Kaepernick didn’t stop with Elway’s comments, either. Broncos head coach Gary Kubiak, who spent all Thursday observing Kaepernick perform against the Broncos defense, said this about the talented passer:

“He’s got a big-time arm,” Kubiak said. “He can make every throw, and then when you cover people up he goes and makes plays. He’s obviously a special player, and to have a good team in this league, you better have a special player at that position.”

There’s no question that Kap has a strong arm and that he likely is the fastest quarterback currently in the NFL (though Robert Griffin III might take offense to this). If Kaepernick, with his total of 1,576 rushing yards, was put in a race against the rest of the NFL quarterbacks, he would probably blow them away.

Broncos linebacker Von Miller, who shined with 14 sacks last season, had first-hand experience practicing with Kaepernick Thursday and also liked what he saw:

“He looked great at practice. I know Colin, and I know he’s been working real tough. He’s been grinding this offseason, and you can tell. He looked poised out there. He looked like a leader.”

It’s always great when you can garner kudos (and sometimes fear) from the opposing team. However, Kaep is going to have to improve dramatically on his current sampling of preseason stats. To this point, he has completed only three passes on eight attempts for 27 yards.

These two teams will face off again after two days of practice on Saturday at 9 p.m. ET in Denver for their third preseason game of the year.