Joe Burrow, Zac Taylor focused on present, not Bengals’ past 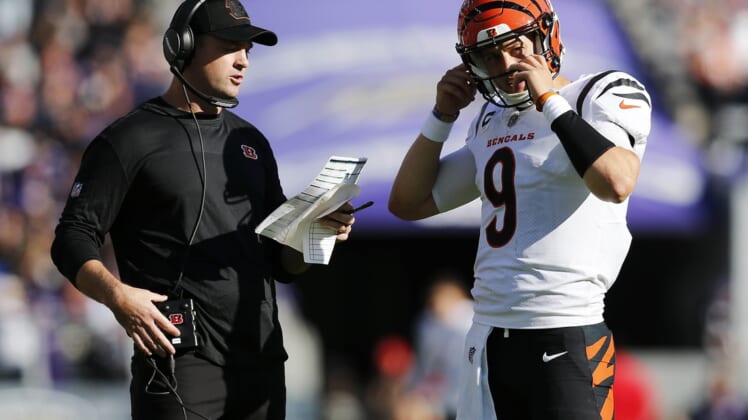 Along the way, the franchise had to snap the NFL’s longest active drought without a playoff win, one that dated to the 1990 season. There is still one more hurdle to overcome: The Bengals are 0-2 in Super Bowls entering Sunday’s game against the Los Angeles Rams.

But turning those fortunes around did not become a rallying cry inside Cincinnati’s locker room this season. Asked several questions about that team history Monday, Burrow and Taylor said the Bengals have always been focused on the here and now.

“Honestly, we’ve never even spoken about the playoff drought once this whole season,” Burrow said. “We have a really young team that doesn’t even understand the historical significance of what we’re doing. We’re just out there playing football, and getting better while we’re doing it.”

“It’s important to embrace all that (history) and understand all that, but this is the 2021 Cincinnati Bengals. They weren’t a part of all that yet,” Taylor added. “And so they’re very much focused, they have a very narrow focus on week to week, playing their best and winning these playoff games to put us in this position.

“I think those are things that they can reflect back on after the season when all the work is said and done, of just how memorable and just how special that is to not only this team and this organization but the city as a whole.”

That isn’t to say Burrow and Taylor are ignorant of the Bengals’ past. Burrow, of course, grew up in Southeast Ohio, where he said NFL allegiances were usually split between the Pittsburgh Steelers and the Cleveland Browns, with a sprinkling of Bengals fans around as well that “kind of got made fun of a little bit.” (Burrow rooted for the Saints because he admired Drew Brees.)

Now Burrow has the chance to deliver a team from his home state its first Lombardi Trophy.

“Being from Ohio and being the quarterback of the Bengals is something I’m really proud of,” Burrow said.

Cincinnati last played in the big game in Super Bowl XXIII, when Joe Montana’s San Francisco 49ers engineered a game-winning touchdown drive to beat Boomer Esiason’s Bengals 20-16. Not only was Burrow not yet born at that point, but Taylor himself was just 5 years old.

The 38-year-old Taylor embodies a quality that he said is prevalent through his team: young (average age: 25.6 years), but mature.