Cincinnati Bengals quarterback Joe Burrow has won all three of his matchups with the Kansas City Chiefs over the past two seasons.

The former No. 1 pick is looking to make that a perfect 4-0 in Sunday’s road date with Kansas City in the AFC Championship Game.

After opening up as underdogs following their win over the Buffalo Bills in the NFL Divisional Playoffs last weekend, the Bengals find themselves as small one-point favorites by most oddsmakers. This is primarily due to the high-ankle sprain Chiefs quarterback Patrick Mahomes suffered last weekend.

Winners of 10 consecutive games heading into this one, most figure that Burrow and the Bengals wouldn’t have a chip on their shoulders. Apparently, that’s not the case. In his media availability ahead of Sunday’s huge title game, Burrow had an interesting take on the Chiefs.

“We’ve been in these spots. We have the experience. We know what team we’re playing. A team that’s been to this game in the last five seasons and they’ve all been in that stadium.

On one hand, it makes perfect sense for Burrow to play the role of underdog. He’s right that Kansas City is heading into its fifth consecutive AFC Championship Game. The team is a juggernaut with Mahomes and future Hall of Fame head coach Andy Reid leading the charge.

Related: Why Joe Burrow has advantage over Patrick Mahomes

On the other hand, Cincinnati has been in this situation before. This exact situation. Closing out his sophomore campaign last year, Burrow led his Bengals into Kansas City as touchdown underdogs in the AFC Championship Game.

After falling down 21-3 in the first half, the former No. 1 pick led his team back to win by the score of 27-24 in overtime. He outplayed Mahomes in the process, leading Cincinnati to the Super Bowl in the process. Do we really believe Burrow thinks he’s a underdog heading into this one? It seems to be more public speak than anything else.

This sure looks like someone who should view himself as an underdog. With that said, Burrow is doing the right thing here. One of the roles of a quarterback is to pump up his team leading into a huge game with a trip to the Super Bowl on the line. Even as a mere third-year quarterback, Burrow seems to know this full well. 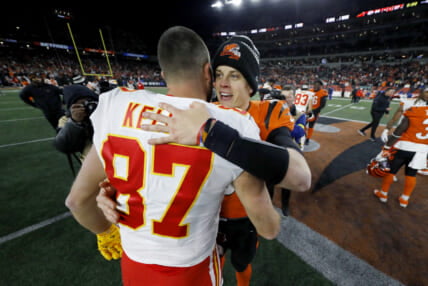 As for Patrick Mahomes and his injury, the quarterback practiced on Wednesday and will be good to go for the AFC Championship Game. Whether he’s anywhere near 100% remains to be seen. That could play a huge role as Joe Burrow looks to lead Cincinnati to it first back-to-back Super Bowl appearance in franchise history.