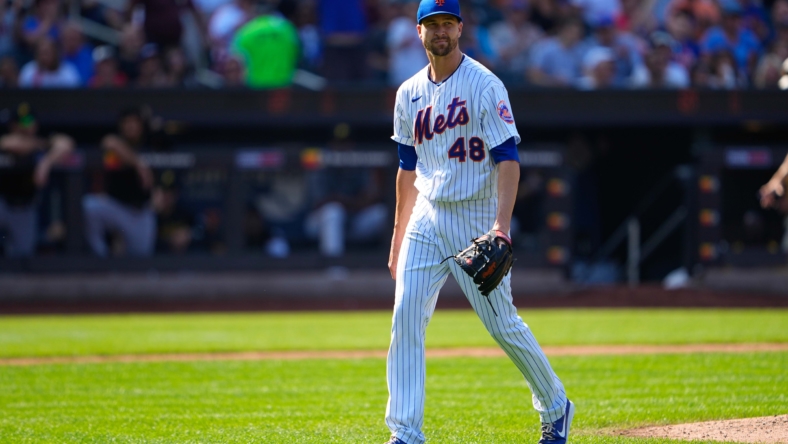 Two-time Cy Young winner Jacob deGrom is one of the top available players on the MLB free agent market this fall and winter.

About as dominating as they come when he’s actually on the bump, the 34-year-old deGrom is keeping his options open. That includes the real possibility he returns to the New York Mets.

But the four-time All-Star is not limiting his possibilities. According to Jon Heyman of the NY Post, deGrom has let let the Texas Rangers know he’s interested in joining the team in free agency.

This could very well be deGrom’s way of upping the ante for the Mets and other teams involved in the sweepstakes for his services. After all, the Rangers are coming off a 94-loss season and fired manager Chris Woodward after 114 games. Even then, there’s some sense that could be made of this.

Texas’ decision to hire three-time World Series champion Bruce Bochy to be its next manager seems to indicate that the team believes it can contend short-term.

The Rangers have also been free-spenders in free agency recently. Just last offseason, Texas added infielders Marcus Semien and Corey Seager at a total cost of north of a half billion dollars. General manager Chris Young is going to be active again this offseason.

As you can see, deGrom has been among the most-dominating pitchers in the game when he’s actually available. At issue here are injuries. In fact, he’s made a combined 38 starts over the past three seasons.

For a team like the Rangers, taking a chance on deGrom would make a ton of sense. They are expected to be in on some of the top-flight starters on the MLB free agent market after struggling big time in that area a season ago. Even if deGrom’s market is set at roughly $40 million annually, the Rangers would be able to afford him.