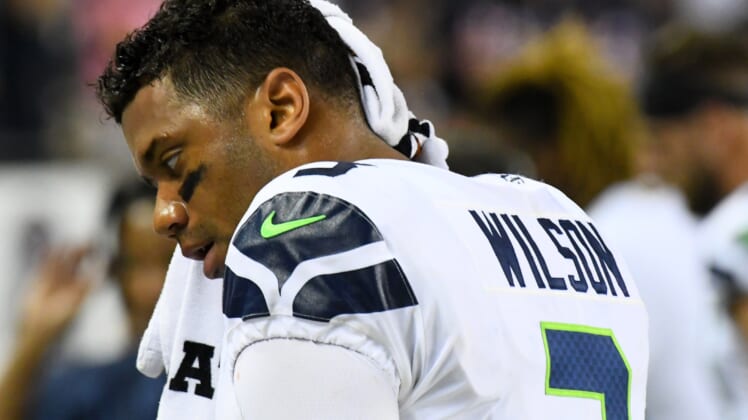 If one thing has become apparent over the first two weeks of the NFL season, it’s that the Seattle Seahawks have failed franchise quarterback Russell Wilson in every possible way.

Whether it’s general manager John Schneider’s inability or unwillingness to acquire offensive line talent or something completely different, Wilson has become his own best defense.

This rang true Monday night agianst the Chicago Bears. The Super Bowl-winning quarterback was sacked six times, including five times in the first half, in what was Seattle’s second consecutive loss to open the season.

Wilson has now been sacked 12 times in two games, adding to a total that represents the highest in the NFL (260) since he entered the league in 2012. He’s also been hit a whopping 18 times on 69 pass attempts. That’s not so nice. That’s also a 22 percent rate. Think about that for a second. Wilson is being hit 22 percent of the time he drops back to pass the ball.

It’s not like no one could have seen this coming. Seattle’s inability or unwillingness to invest on the offensive line has been an issue for years. How else can we explain away the team continuing to throw Germain Ifedi out there at right tackle?

Nice play by safety Jahleel Addae to break up the pass pic.twitter.com/yo37gsJLg9

Ifedi isn’t just a turnstile out there. Rather, he looks like he’s driving on an icy road without any chains. Terrible!

It might not be as much on Seattle being unwilling to invest along the offensive line. Ifedi himself was a first-round pick in the 2016 NFL Draft before challenging Ereck Flowers as the worst starting offensive lineman in the league. Maybe, it’s about Schneider’s inability to actually find talent at this position in the draft.

Remember, Seattle selected James Carpenter in the first round of the 2011 NFL Draft. He played substandard football for four seasons prior to leaving for the Jets.

Either way, this is becoming an issue that’s magnified with the lack of surrounding talent on offense. With Doug Baldwin sidelined to injury, Wilson doesn’t single player that can win on his own.

The selection of running back Rashaad Penny in the first round of this year’s draft smelled of desperation. A third-round talent, at best, Penny has shown pretty much nothing through two games. It’s led to a lack of balance on an offense that boasts the least-talented line in the game.

All the while, Wilson is being tasked to play at an MVP level for a team that would otherwise be in rebuilding mode. Here’s an organization that moved on from stud defenders Michael Bennett and Richard Sherman this past offseason while refusing to pony up the cash to retain Jimmy Graham and Sheldon Richardson.

At the same time, future Hall of Fame safety Earl Thomas is playing out the final year of his contract after Seattle decided against extending him this past offseason.

Speaking of extension, the Seahawks themselves have refused to even sit down at the table with Wilson.

“Wilson is now less than two years from the expiration of his current contract — the same circumstance Rodgers was in prior to his recent extension — and yet there has not been a single conversation about a new contract, and no negotiations are planned or even expected,” CBS Sports Jason La Canfora reported over the weekend.

But when it comes to the game’s most-important position, teams have not been afraid to back up the Brinks truck on long-term deals.

Just look at the contracts signed over the past two calendar years.

What do all of these quarterbacks have in common? Their teams have also succeeded in providing them with good offensive lines.

Atlanta went out there and extended left tackle Jake Matthews on a huge contract prior to the start of the 2018 season. The 49ers extended Pro Bowl left tackle Joe Staley during the offseason and selected his heir-apparent, Mike McGlinchey, in the top 10 of April’s draft.

While the Lions’ offensive line has struggled to an extent, it’s not for a lack of effort by the front office. In addition to spending big bucks on T.J. Lang and Rick Wagner, they’ve selected an offensive lineman in the first round of three of the past four drafts. The story goes on…and on.

Seattle? It didn’t pick up an offensive linemen until the fifth round of April’s draft. That came after Wilson was sacked 43 times last year.

Short of Seattle coming to the table for negotiations, the recommendation here is that Wilson holds out from team activities following the 2018 season in an attempt to be paid like the MVP he is.

The only hope between now and then is that he somehow finds a way to remain healthy in front of a disastrous offensive line and an organization that has failed to see the worth of a generational quarterback.