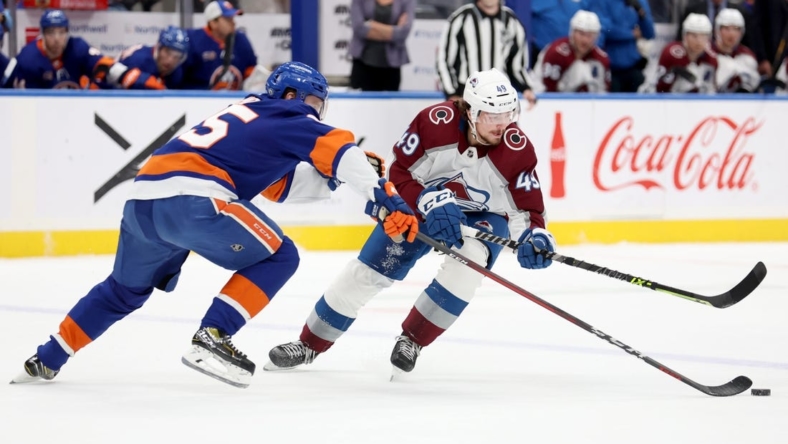 Scott Mayfield and Anthony Beauvillier scored the tying and go-ahead goals in a 17-second span just beyond the midway point of the third period Saturday night for the host New York Islanders, who overcame a three-goal deficit to stun the Colorado Avalanche, 5-4, in Elmont, N.Y.

The Islanders peppered Georgiev before Mathew Barzal’s shot into the crease glanced off Mayfield’s stick for the tying goal with 9:21 left. Anders Lee forced a turnover in the neutral zone and dished to Beauvillier, who beat Georgiev on a semi-breakaway.

Noah Dobson scored in the second, Zach Parise scored early in the third and Brock Nelson added an empty-netter that proved to be the game-winner with 1:21 left for the Islanders, who have won three straight, all against teams that qualified for the postseason in 2021-22. Goalie Semyon Varlamov, who played for the Avalanche from 2011 through 2019, made 33 saves

Evan Rodrigues scored twice and Mikko Rantanen and Alex Newhook had a goal apiece for the Avalanche, which lost both ends of a back-to-back road set before heading to Finland for the Global Series against the Columbus Blue Jackets next week. Newhook scored his goal with 29.9 seconds left.

After a scoreless first period, a pair of power-play streaks ended within the first minute of the second. Rodrigues scored at the 46-second mark to snap an 0-for-8 drought on the power play for the Avalanche, which was 0-for-6 in Friday’s 1-0 loss to the New Jersey Devils. It was also the first power-play goal of the season against the Islanders, who set an NHL record by killing their first 28 penalties.

Georgiev turned back a snipe from Ryan Pulock and a couple rebound attempts by Josh Bailey before Josh Manson blocked a shot by Pulock and passed to a streaking Rantanen, who bore in alone on Varlamov and beat him under the glove at 7:28.

Rodrigues collected his second goal just 65 seconds later. The center was jostling for position with Pelech when he got a stick on Nathan MacKinnon’s shot, which fluttered past a sprawling Varlamov.

The Islanders began their comeback 1:20 later when Dobson’s shot from the right faceoff circle sailed past Georgiev, who was screened by Bailey as the right winger battled Bowen Bryan in front of the goalie.

Parise’s fourth attempt at jabbing home the rebound of a shot by Pageau trickled through Georgiev’s legs 3:35 into the third.