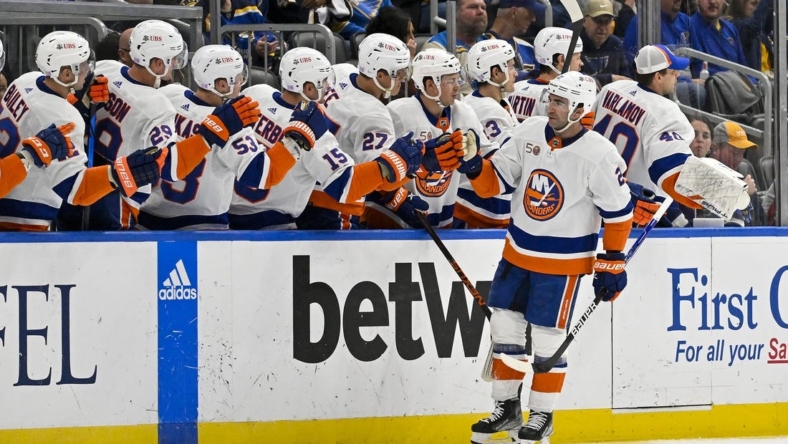 Anders Lee and Brock Nelson each scored a goal and earned an assist to lead the visiting New York Islanders past the slumping St. Louis Blues 5-2 on Thursday.

The Islanders won their fifth straight game while the Blues suffered their sixth consecutive loss, all in regulation.

Kyle Palmieri, Josh Bailey and Jean-Gabriel Pageau also scored for the Islanders. Noah Dobson had two assists for New York, while Ilya Sorokin stopped 32 of 34 shots to earn the victory.

Vladimir Tarasenko and a goal and an assist and Robert Thomas also scored for the Blues. Jordan Binnington made 25 saves.

Tarasenko put the Blues up 1-0 at 8:17 of the first period after Torey Krug fired a shot wide of the left post. The puck caromed off the end boards to Tarasenko on the right side — and he scored before Sorokin could slide over.

But the Islanders scored four goals in the first 10:18 of the second period to seize control of the game.

Palmieri tied the game just 14 seconds into the period by driving to the left post and redirecting in Dobson’s shot from the right wing.

Nelson put the Islanders up 2-1 with a power-play goal less than five minutes later. Dobson picked off a clearing attempt by Ryan O’Reilly and fed Lee breaking to the left post. Lee then made a cross-crease pass to Nelson for the tap-in.

Bailey converted a 2-on-1 rush with Mathew Barzal to make it 3-1. Binnington made the first save, but from behind the net Bailey poked the loose puck in off Blues defenseman Nick Leddy.

Lee pushed the lead to 4-1 when Nelson circled the net and fed him near the right post for another point-blank shot.

Thomas cut the Islanders lead to 4-2 with a power-play goal with 11:20 left to play. Ivan Barbashev set him up in the left circle with a backwards pass through his legs.