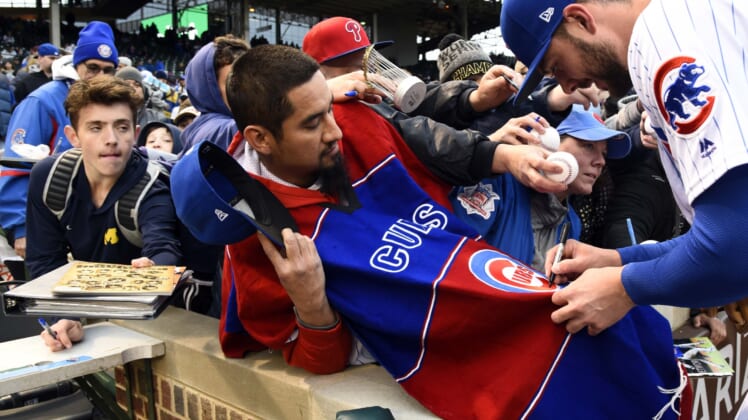 Many players in Major League Baseball have, for a substantial time, yearned to connect with fans in an easier way. The way media is changing at such a fast pace, there’s finally a way to do that.

Tony Clark spent a decade and a half in a major league uniform. At the age of 37, he played his last game with the Arizona Diamondbacks. But before that, he was just a kid staring down from the bleachers, idolizing his favorite players. He talked to Sportsnaut about feeling so far away from these individuals.

“I couldn’t imagine being in a world where I feel I could just about reach out and touch the guys I admire who were playing. Now, it’s totally different,” Clark explained. “And there’s an opportunity as a young person and a player to bring in the next generation of fans and that value is immeasurable.”

To facilitate more fan-to-athlete interactions, a new mobile social community was created at the request of the players, who were “looking for a more meaningful way to directly connect with their fans” according to a recent press release.

“Seeing fans react and get into this is pretty cool.” -Adam Jones, Baltimore Orioles

Fans can have a live chat with Tampa Bay Rays first baseman Logan Morrison, watch Hector Santiago relax with his family and even follow their favorite MLB memes while participating in contests and competitions.

“On a daily basis, players will share unique and vibrant content to their Infield Chatter accounts, including behind-the-scenes photos and videos that offer fans a more in-depth perspective of the players they cheer for 162 games a year,” according to the release. “Players will share snippets of who they are away from the ballparks, taking fans inside their everyday lives by sharing interests, hobbies, and personal stories.”

Clark, current MLB Players Association Executive Director, said he speaks to the players and the MLBPA often about what they can work on to engage with the fans. His awareness with the ever-changing concept of multimedia and journalism is something he spoke to us about as well.

“We want to do what’s different than what’s out their currently,” he explained. “Television or print media moved to online and internet media and so far the fans have picked it up rather quickly.”

Chicago Cubs All-Star third baseman and MVP Kris Bryant also talked about Infield Chatter, saying fans are “the main reason the game is so special.” He also spotlighted the uniqueness of the app, saying it’s a type of communication that you can’t get anywhere else.

There are over 1,000 players interacting with fans and curious minds so far on the app, and Clark isn’t the only MLB veteran involved.

“The power of the players working together to engage with fans can be a game changer and make baseball and the personalities that drive it that much more fun to experience.”

Saying this is a simple app to download to your smartphone (which it is) takes away its character. The enthusiasm and excitement in Clark’s voice show this is about connecting like-minded individuals who share one thing in common, a love for baseball.

“It’s been an interesting walk,” Clark tells me, “And while any new thing has it’s bumps, we remain excited about the possibilities.”

You can download Infield Chatters on your Apple device and Google Play.